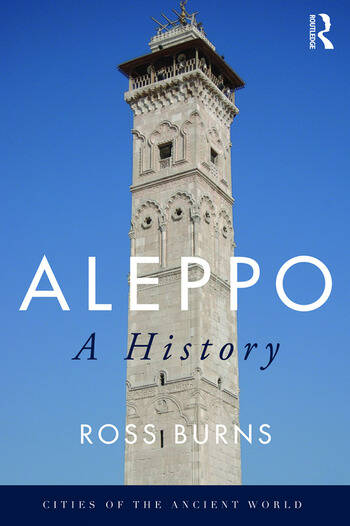 Aleppo is one of the longest-surviving cities of the ancient and Islamic Middle East. Until recently it enjoyed a thriving urban life—in particular an active traditional suq, with a continuous tradition going back centuries. Its tangle of streets still follow the Hellenistic grid and above it looms the great Citadel, which contains recently-uncovered remains of a Bronze/Iron Age temple complex, suggesting an even earlier role as a ‘high place’ in the Canaanite tradition.

In the Arab Middle Ages, Aleppo was a strongpoint of the Islamic resistance to the Crusader presence. Its medieval Citadel is one of the most dramatic examples of a fortified enclosure in the Islamic tradition. In Mamluk and Ottoman times, the city took on a thriving commercial role and provided a base for the first European commercial factories and consulates in the Levant. Its commercial life funded a remarkable building tradition with some hundreds of the 600 or so officially-declared monuments dating from these eras. Its diverse ethnic mixture, with significant Kurdish, Turkish, Christian and Armenian communities, provide a richer layering of influences on the city’s life.

In this volume, Ross Burns explores Aleppo's rich history from its earliest history through to the modern era, providing a thorough treatment of this fascinating city history, accessible both to scholarly readers and to the general public interested in a factual and comprehensive survey of the city’s past.

3. In Antioch's Orbit - Byzantine Aleppo in a World of Churches and Monasteries

4. Transition to an Islamic Order - Aleppo on a New Frontier

5. A Delicate Balance - Between Turkic and Arab Worlds

6. Fortress of Islam - Aleppo and the First Crusade

Ross Burns worked in the Australian Department of Foreign Affairs for 37 years until his retirement in 2003, with roles including Ambassador to Syria and Lebanon (based in Damascus) from 1984 to 1987, as Minister in Paris (and Ambassador to UNESCO) and as Ambassador in South Africa (1992–95), Athens (1998–2001) and Tel Aviv (2001–2003). After his retirement, he completed a Ph D at Macquarie University in Sydney on ‘The Origins of the Colonnaded Axes of the Cities of the Near East Under Rome’. He is the author of Damascus (Routledge, 2004) and Monuments of Syria (3rd edition, 2009).

"Ross Burns' Aleppo: A History is a tour de force. Don't be deceived by the modest title. This is so much more than the story of one of the Middle East's most interesting and oldest cities, it is a sweeping and erudite history of Syria itself, told by an academic and diplomat of immense learning and wisdom. What is more, the economy, wit and refinement of the prose flatters the senses."

"[This] substantial book displays true scholarship, examining the whole sweep of Aleppo's history from 3,600 BC to the present day. Along the way are masterly analyses of the transition to Islam with its ingenious waqf system of religious endowments, the delicate balance between the Turks and the Arabs, the vagaries of the French Mandate, and finally the rocky history from independence up to the present. Each chapter is thoroughly supported with detailed maps and photos."

"It is incredible to think that there has never been a one volume history of Aleppo before. Burns’ Aleppo will join its companion, Damascus: A History, as an excellent introduction to the subject for students, anyone interested in the history of this fascinating city and, it is much to be hoped, will one day become a guide for future visitors."

"Few people have done more to promote and preserve an understanding of extraordinary heritage of Syria than Ross Burns. This authoritative work on the history of Aleppo, one of the world’s oldest cities, stands proudly alongside his Monuments of Syria and history of Damascus, detailing the unique treasures that survive but many that have been lost forever."

- Rory Stewart in the London Review of Books