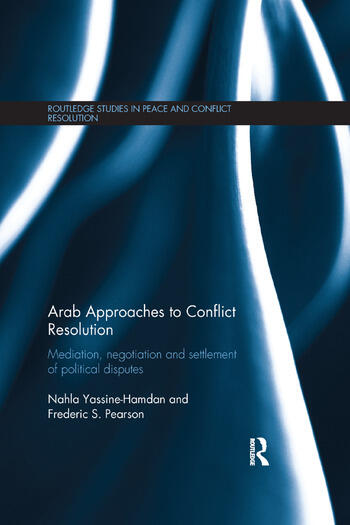 This book examines Arab approaches to mediation, negotiation and settlement of political disputes.

This book proposes that two clusters of independent variables are potentially responsible for the distinctive nature of Arab conflict resolution. Firstly, those linked with Arab political regimes and imperatives, and secondly those linked with Arab and /or Islamic culture. The text also focuses on the Arab League and its history of involvement in crisis and conflict situations, along with the roles of individual leaders, emissaries and extra-regional actors such as IGOs (Inter-Governmental Organisations) in undertaking mediation initiatives. IGO and Arab League activity has taken on new importance since the various intervention attempts in connection with the 'Arab Spring' since 2011.

During the negotiation process, most Arab regimes tend to view conflicts within a broad historical context and Islamic culture prioritises the cohesion of the community and internal stability of the state over individual autonomy. This has created an authoritarian style of leadership, and in practice, leaders in the Middle East have had near absolute authority in the decision-making process—a fact which will have a lot of weight in conflict management and whether peace will endure for a long period of time.

This book is unique in studying these clusters through comparative systematic case study analysis of events prior to and subsequent to the 'Arab Spring', augmented by a quantitative analysis of sample data on Arab disputes, compiled from a larger and newly augmented study comprising the years 1945-2000. Complementary data from the Uppsala Conflict Data Program’s (UCDP) data base of armed conflicts since 1975 is also utilized.

This book will be of much interest to students of conflict resolution, peace and conflict studies, Middle Eastern politics and IR in general.

Nahla Yassine-Hamdan is on the adjunct faculty at Wayne State University, Detroit, Michigan, USA, and has a Ph.D. in Political Science.

Frederic S. Pearson is Director of the Center for Peace and Conflict Studies and a Professor of Political Science at Wayne State University, USA.

"This book offers a comparative political analysis of the cultural factors affecting Arab and Islamic state practices of conflict resolution... This is for specialists in Middle Eastern politics and those interested in conflict resolution within international relations theory.