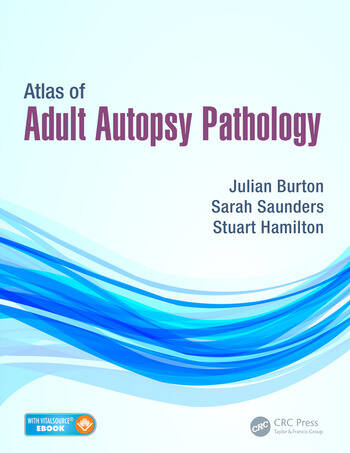 The Atlas of Adult Autopsy Pathology is a full-color atlas for those performing, or learning to perform, adult autopsies. It is arranged by organ systems and also includes chapters on external examination findings, the effect of decomposition, and histopathological findings, as well as procedures and devices one may encounter during autopsy.

The book includes a series of more than 700 color clinical images of adult autopsy pathology. It covers both diseases that are commonly seen as well as less common, or even rare, diseases. In some instances, a diagnosis may be made on the basis of the macroscopic appearance alone, while in others further investigation is required and appropriate guidance is provided.

Unlike other atlases, this book goes beyond simply providing a collection of images. It features concise guidance on how to interpret macroscopic findings and prompts when further considerations are useful. This atlas is designed to be a visual reference that can assist with rapid diagnosis of autopsy findings.

Comprehensive in its coverage with high-quality illustrations, this definitive atlas is an invaluable resource to trainees and consultant pathologists performing non-forensic autopsies. The book is also an important reference for anatomical pathology technicians, medico-legal specialists, and their officers.

The Hepatobiliary System and Pancreas

Histology of the Autopsy

Julian L. Burton, MBChB (Hons), MEd, FHEA is the lead coronial pathologist at the Medico-Legal Centre in Sheffield, UK. He is also a senior teaching fellow and director of undergraduate medical admissions at the University of Sheffield Medical School. Dr. Burton performs 350 to 400 adult medico-legal autopsies per year. These include investigation of deaths where the cause of death is not known. He also investigates possible suicides, accidental deaths, industrial deaths, peri/post-operative deaths and deaths where there are concerns that death may have been due to medical or surgical intervention. He has taught autopsy practice to audiences around the world.

, BSc (Hons), MBChB, MD, DMJ (Path), PGCert Clin.Ed, FHEA is a speciality registrar in the Department of Cellular Pathology at Royal Devon and Exeter NHS Foundation Trust. Dr. Saunders was trained in forensic pathology at the East Midlands Forensic Pathology Unit and holds the DMJ in Forensic Pathology. She also obtained a medical doctorate in forensic radiology and maintains a research interest in minimally invasive autopsy techniques. As part of her role as a histopathologist, she undertakes hospital and medico-legal autopsies. Dr. Saunders holds a PGCert in clinical education and is a fellow of the higher education authority.

, BMSc(Hons), MBChB, FRCPath, MFFLM is a Home Office Registered forensic pathologist at East Midlands Forensic Pathology Unit in Leicester, UK. He is the deputy chief forensic pathologist for the East Midlands at the East Midlands Forensic Pathology Unit. He has performed around 3000 autopsies ranging from simple sudden and unexpected deaths to complex multiple homicides. Dr. Hamilton has provided expert comment for various newspaper articles and TV programmes as well as expert testimony in various courts. He is also the honorary secretary of the British Association in Forensic Medicine and a member of the American Academy of Forensic Sciences.

"This atlas is more than a collection of images. It provides reliable instruction on the interpretation of macroscopic findings … [and] represents a wealth of information for medical students, pathology trainees, more experienced pathologists, and physicians interested in pathology."
—Sherry Krawitz, MD, PhD, University of Manitoba College of Medicine in Doody’s Book Reviews