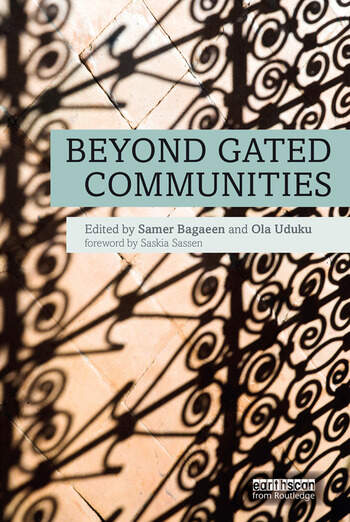 Research on gated communities is moving away from the hard concept of a 'gated community' to the more fluid one of urban gating. The latter allows communities to be viewed through a new lens of soft boundaries, modern communication and networks of influence.

The book, written by an international team of experts, builds on the research of Bagaeen and Uduku’s previous edited publication, Gated Communities (Routledge 2010) and relates recent events to trends in urban research, showing how the discussion has moved from privatised to newly collectivised spaces, which have been the focal point for events such as the Occupy London movement and the Arab Spring.

Communities are now more mobilised and connected than ever, and Beyond Gated Communities shows how neighbourhoods can become part of a global network beyond their own gates. With chapters on Australia, Canada, Europe, South America, Asia, Africa and the Middle East, this is a truly international resource for scholars and students of urban studies interested in this dynamic, growing area of research.

Foreword: Gated as a Variable  Introduction  1. Beyond Gated Communities: urban gating, soft boundaries and networks of influence and affluence  2. Gated Communities in a Changing Geopolitical Landscape: An exploratory genealogy of ‘Occupy London’  3. Gating in Urban Johannesburg: Digging inside the social and political systems of a golf estate and an open suburb of Johannesburg  4. Gated Communities in South Korea and the Dilemma of the State  5. Urban Gating in Thailand: The new debates  6. Gating in Urban Ireland  7. Gating in the Western Cape, South Africa: Planning and environmental agents  8. Beyond Gating: Condo-ism as a way of urban life  9. Urban gating in Israel: home gating practices on kibbutzim and moshavim  10. Urban Gating in Puebla, México: An S.O.S. for World Solidarity and Citizen Empowerment   11. Gating in South Africa: A gated community is a tree; a city is not  12. Urban Gating in Chile: Chuquicamata: a corporate mining town: ‘bounded territory within a territory’

Samer Bagaeen leads the University of Brighton Planning School in the United Kingdom and is Visiting Professor of Planning at the Institute of Urban Economy in Lima, Peru. He is a graduate of University College London and holds an MBA from the Strathclyde Business School in Scotland. He was invited in 2012 into eminent Fellowship of the Royal Institution of Chartered Surveyors and in 2013 was invited to join the Academy of Urbanism as an Academician. He co-edited Gated Communities: Social Sustainability in Contemporary and Historical Gated Developments (Routledge, 2010 & 2012) and contributed to Dimensions of the Sustainable City (Springer, 2010). He has a research interest in the development of former military land, real estate development and tourism in the Middle East and his publications in this field include ‘Saudi Arabia, Bahrain, United Arab Emirates and Qatar: Middle Eastern complexity and contradiction’ in G. Squires and E. Heurkens (eds.) (2015) International Approaches to Real Estate Development (Routledge), and ‘The soft power of branding in a post conflict situation: Gulf tourism in Bahrain’ in M. Stephenson and A. al-Hamarneh (eds.) (2015) International Tourism and the Gulf Cooperation Council States (Routledge).

is Reader in Architecture at Edinburgh University, where she is Programme Director of the taught M.Sc. in Urban Strategies and Development, and teaches an interdisciplinary elective on African Cities. She has research interests in social infrastructure provision in urban areas, specifically for minority groups, and ‘urban gating’. Modern Movement Architecture in West and sub-Saharan Africa, and the history of school design in sub-Saharan Africa are also themes of inquiry. She is also involved in environmental design teaching and active in environmental analysis research, specifically investigating the use of digital tools including computer modelling and ‘apps’ for environmental analysis teaching at tertiary level. She has held EU, DfID, and British Academy awards for research in these areas, and is currently working on the Alan Vaughan Richards Archive Project in Lagos, Nigeria. Aside from her collaborative editorship on this and the previous volume Gated Communities: Social Sustainability in Contemporary and Historical Gated Developments (Routledge, 2010 & 2012), she was a co-editor of Africa Beyond the Post-Colonial, Uduku and Zack Williams (2004) and co-author of Social Infrastructure in Granby-Toxteth, Uduku & Ben-Tovim, (1997).

"In Beyond Gated Communities, the crux of ‘gating’ is expressed through themes of: club theory; inclusion and exclusion; power, structure, processes and social relations; and pseudo gating. The concept of urban gating takes the reader away from the usual construct of a gated community. This stretches the boundaries into new territories of mobile movements, modern communication, power networks that influence and jurisdictional compromise. The research identifies how neighbourhoods, whether physically or psychologically gated, can contribute to global networks beyond their own gates. Through consideration of the five proposed lenses, Beyond Gated Communities soundly identifies and extends the essence of gating allowing the reader to engage with new understandings of the metastasising phenomena of ‘gating’." – Housing Studies, Erika Altmann, University of Tasmania, Australia