Bosnia and the Destruction of Cultural Heritage 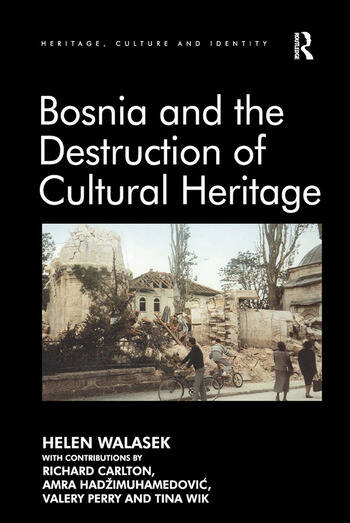 Bosnia and the Destruction of Cultural Heritage

The massive intentional destruction of cultural heritage during the 1992-1995 Bosnian War targeting a historically diverse identity provoked global condemnation and became a seminal marker in the discourse on cultural heritage. It prompted an urgent reassessment of how cultural property could be protected in times of conflict and led to a more definitive recognition in international humanitarian law that destruction of a people's cultural heritage is an aspect of genocide. Yet surprisingly little has been published on the subject. This wide-ranging book provides the first comprehensive overview and critical analysis of the destruction of Bosnia-Herzegovina's cultural heritage and its far-reaching impact. Scrutinizing the responses of the international community during the war (including bodies like UNESCO and the Council of Europe), the volume also analyses how, after the conflict ended, external agendas impinged on heritage reconstruction to the detriment of the broader peace process and refugee return. It assesses implementation of Annex 8 of the Dayton Peace Agreement, a unique attempt to address the devastation to Bosnia's cultural heritage, and examines the treatment of war crimes involving cultural property at the International Criminal Tribunal for the former Yugoslavia (ICTY). With numerous case studies and plentiful illustrations, this important volume considers questions which have moved to the foreground with the inclusion of cultural heritage preservation in discussions of the right to culture in human rights discourse and as a vital element of post-conflict and development aid.

Helen Walasek was an Associate of the Bosnian Institute, London, and was Deputy Director of Bosnia-Herzegovina Heritage Rescue (BHHR) for which she worked 1994-1998. She has a Diploma in Museum Studies from University of Leicester. She made many working visits to Bosnia during and after the 1992-1995 war, including as an Expert Consultant for the Council of Europe reporting on museums in Bosnia-Herzegovina in 1995 and 1996. In 2000 and 2001 she carried out two field trips (with Richard Carlton) making the first post-war assessment of destroyed historic monuments across Bosnia-Herzegovina for which there was little accurate information at the time.

'As culture is increasingly targeted in conflicts, Walasek reminds us of an episode from which vital lessons should have been drawn. Her forensic analysis of the failure of the international community to understand whose heritage was destroyed during the Bosnian conflict and why, is essential for informing future efforts to preserve both heritage and human rights.'

Robert Bevan, author of The Destruction of Memory: Architecture at War

'Based on impressive expertise and prodigious research, this ground-breaking study of cultural destruction and reconstruction in Bosnia-Hercegovina represents a tour de force. Helen Walasek and her collaborators have produced a book that no serious student of the Bosnian war and its aftermath should be without.'

Marko Attila Hoare, Kingston University, author of How Bosnia Armed and The Bosnian Muslims in the Second World War

'Walasek's unique collaboration with other leading experts in cultural heritage uses a plethora of Bosnian case studies to forge an extensive, superbly detailed account of the kaleidoscopic effects of cultural destruction. This account pulls no punches politically but systematically stresses the critical role of cultural heritage in sustaining pluralism and diversity, its deep-rooted connection to justice and human rights in peace building contexts.'

Gregory Kent, University of Roehampton, author of Framing War and Genocide: British policy and media reaction to the war in Bosnia

'The concept of cultural genocide is often warily received, even now, but this tremendous and unforgettable book will establish its validity forever in the public mind. This is a detailed and compellingly readable account of the fearsome cultural destruction of the Bosnian war, as communities tried not only to expel and exterminate their rivals but to destroy the physical evidence that they had ever existed. But Helen Walasek and her colleagues also indict the unforgiveable reluctance of the international community to recognise what was happening, intervene or name the guilty.'

'…a comprehensive account of the destruction and subsequent reconstruction of Bosnia’s cultural heritage, presenting an important corrective to much wartime misinformation…an indispensable book for those studying south-east Europe, contemporary conflict and the wider politics of cultural heritage.'

Catherine Baker, University of Hull, author of The Yugoslav Wars of the 1990s in LSE Review of Books

'An important study, it is especially relevant for those examining the long-term effects of destruction to cultural heritage during conflict – something that can be applied to other parts of the world today.'

"The monograph is the first full-scale study of the enormous cultural crimes perpetrated in Bosnia by ethnic nationalists, and of the consequences these crimes have had on the country’s heritage and identity since the signing of the Dayton Peace Agreement in 1995… The documentation presented in this volume is overwhelming and unequivocal…The credibility of this book is enhanced by the fact that two of the authors (Walasek and Carlton) courageously visited many of the damaged or destroyed heritage monuments shortly after the war ended."

"This remarkable book documents in great detail and for the first time in a single and easily accessible place the extent of wartime damage carried out during the last major European war when the systematic destruction of the cultural heritage of the enemy was used as an extension of ethnic cleansing."

"An important addition to the Ashgate series 'Heritage, Culture and Identity', edited by Professor Brian Graham, Bosnia and the Destruction of Cultural Heritage is a welcome asset in any library and will be of special interest to students of Bosnian history, Ottoman architecture and heritage protection in general."

“Despite the widespread international attention the Bosnian conflict attracted, surveys of the destruction and scholarly considerations are few. Bosnia and the Destruction of Cultural Heritage documents the destruction in painstaking detail, but through its fine writing, a narrative emerges that is disturbing and moving…This book makes an important contribution to the international discourse about the links that integrally bind the protection of human rights with the protection of heritage in all its forms; its content is, at once, challenging and compelling, but it is a consummate analysis of a conflict founded on issues that remain all too relevant.”

“… an authoritative work which draws our attention back twenty years ago, to another incident of premeditated cultural cleansing where heritage destruction played a central element in aggressive campaigns that sought to create mono-ethnic / mono-religious territories... Walasek’s book reminds us that the cultural cleansing in Bosnia, which reached its apogee in the burning of the old Sarajevo library, was not something invented by the Taliban, Al-Qaeda or ISIS but a recurring attack on diversity and pluralism of a region that should be recognized and which merits individual criminal responsibility separate and apart from human rights jurisprudence.”

"By way of its meticulous documentation and analysis of the causes and consequences of the destruction of historical buildings in Bosnia "Bosnia and the Destruction of Cultural Heritage" contributes to an improved understanding of how cultural heritage can become a target in war, but also why the conduct during and after the conflict to assist victims have been tentative and paved with mistakes. This experience will be important in order to draw lessons from when the guns once fall silent in Syria and Iraq, and the reconstruction work instead picks up."

"In conclusion, Bosnia and the Destruction of Cultural Heritage is the most detailed source on the destruction of cultural heritage during the Bosnian War 1992–1995."