Bruno Latour
The Normativity of Networks 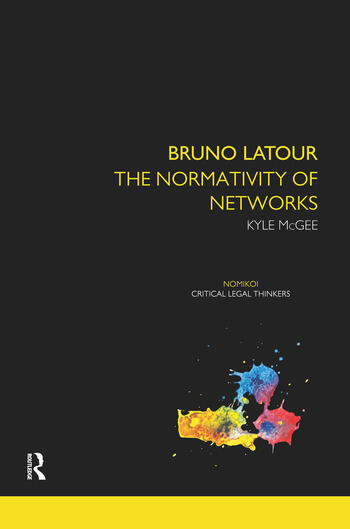 Bruno Latour: The Normativity of Networks

The first extended study of Bruno Latour’s legal theory, this book presents a critical reconstruction of the whole of Latour’s oeuvre to date, from Laboratory Life to An Inquiry into the Modes of Existence. Based on the powerful insights into normative effects that actor-network theory makes possible, the book advances a new theory of legal normativity and the force of law, rethinking Latour’s work on technology, the image, and referential scientific inscriptions, among others, and placing them within the ambit of legality. The book also captures and deepens the contrast between the modern legal institution and the value of law as a mode of existence, and provides a fulsome theoretical account of legal veridiction. Throughout, Latour’s thought is put into dialogue with important progenitors and adversaries as well as historical and contemporary strands of legal and political philosophy.

But the thread of legality is not confined to Latour's reflections on the making of law; rather, it cuts through the whole of his highly diverse body of work. The empire of mononaturalism augured by modern philosophies of science is thoroughly juridical; as such, the actor-network theory that promises to undo that empire by freeing the value of the sciences from its epistemological clutches is unthinkable without the device of the trial and the descriptive semiotics of normativity that sustain ANT. The democratization of the sciences and the vibrancy of ecologized politics that become possible once the bifurcation of nature into essential primary and disposable secondary qualities is disabled, and once the ‘modern Constitution’ is called into doubt, also have important legal dimensions that have gone largely unexamined. Bruno Latour: The Normativity of Networks remedies this and other omissions, evaluating Latour’s thought about law while carrying it in striking new directions.

This book introduces legal scholars and students to the thought of the philosopher and sociologist Bruno Latour, whilst also presenting a critical analysis of his work in and around law. This interdisciplinary study will be of interest to those researching in Law, Philosophy, and Sociology.

"Reading such a perceptive and deep book, the author who is the subject of the commentary feels like a sailboat architect realising that the hull he has painfully designed has suddenly turned into a real boat through the skills of the skipper at the helm. What until then has been no more than a mere proposition has become an exciting adventure to understand the specificity of legal connectors. Even though the design of the boat plays a role, it's the skipper that gets the cup... A perfect fulfilment of the AIME project." Bruno Latour, Sciences-Po

"From time to time, although much too rarely, comes a book that shatters the very foundations of what we believed. Kyle McGee's 'The Normativity of Networks' is one of those books. Not only does it provide the most extensive and accurate description of Bruno Latour's profound renewal of Western metaphysics available to the contemporary reader, but it does so with the help of the most unexpected of instruments: law. Reformulating Latour's Actor-Network Theory (and beyond), it is then the very role and importance of law in Western metaphysics (and its everyday practice) that is thrown radically into question with this magisterial work, and, with it, the research program of any future investigation within the realm of law. Already an absolute classic - written with class and poise." Laurent de Sutter, Vrije Universiteit Brussel