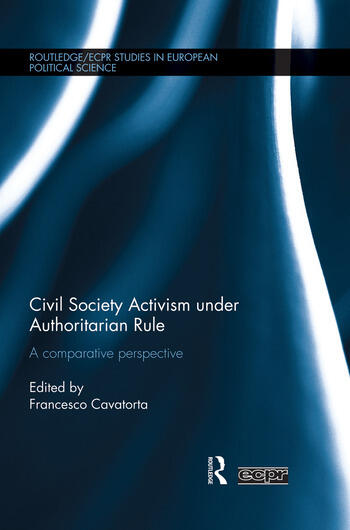 This book examines how civil society actors operate under authoritarian constraints, and examines how this is linked to regime change.

This book moves beyond traditional notions of civil society and explains the complexity of state-society relations in authoritarian contexts outside the framework of democratization. Rejecting a wholly normative approach, the contributors focus on the whole range of civic activism under authoritarianism, from resistance to support for the political system in place. They explain how activism under authoritarianism is subject to different structures, and demonstrate how active citizens have tried to claw back powers of expression and contestation, but also sought to create a voice for themselves as privileged interlocutors of authoritarian regimes.

Civil Society Activism under Authoritarian Rule will be of interest to students and scholars of international politics, comparative politics, civil society, authoritarianism and regime change.

Francesco Cavatorta is Senior Lecturer in the School of Law and Government at Dublin City University, Ireland.