Class Conflict
The Pursuit and History of American Justice 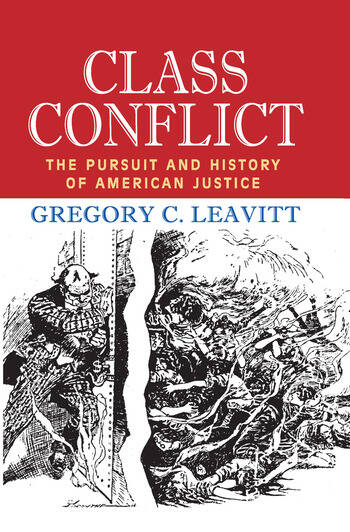 Class Conflict: The Pursuit and History of American Justice

In a just society the law not only applies to all equally, but also arises from the consent of the people it embraces. As such, justice implies that people have access to governance. A just society provides and guards social and individual rights for all its members. The freedom of speech, therefore, is a right of all, and society has institutionalized processes to guarantee that freedom.

Due to the American people's understanding of exclusion and rank, the meaning of justice was fragmented by social status and class. While this book views American justice through a prism of social-class conflict, Gregory C. Leavitt argues that it would be incorrect to portray this perspective as somehow whole. American justice is relative to many cultural groupings and conditions and is thus at the same distance from its encompassing ideal understood by common Americans.

Beginning with the late eighteenth century and ending in the late twentieth century, Leavitt traces the history of class conflict and the struggle for justice among Americans. He argues that class struggles remain a significant factor in American social problems, because the American situation grew out of government promises of freedom and liberty to the lower class and the development of a powerful middle class. This is a provocative contribution to the debate over the future of social justice in America.

2. Eighteenth-Century America: The Pre-Revolutionary Era
The Evolution of Republicanism: From the Merchant to the Common People
The American Gentry
The People
Violent Confrontations
The Tyranny of Taxation: The Social Class Glue

3. The Making of the Constitution
The Federalists
The Antifederalists
The Articles of Confederation and Perpetual Union
Pre-Convention Meetings
The Twelve

4. The Constitutional Convention
Property Rights, Social Inequality, and Justice
Secrecy and Government
The Economic Principles of the Constitution
The Supremacy Clause and Necessary and Proper Clause
Judicial Review
The Contract Clause
War Powers
Taxation
The Structure of Representation: A Check on the People's House
District Voting: All or Nothing and the Two-Party System
Ratification of the Constitution

9. Class Conflict in the Early Twenty-First Century
Class and Justice: A Conclusion