Classical Liberalism and the Jewish Tradition 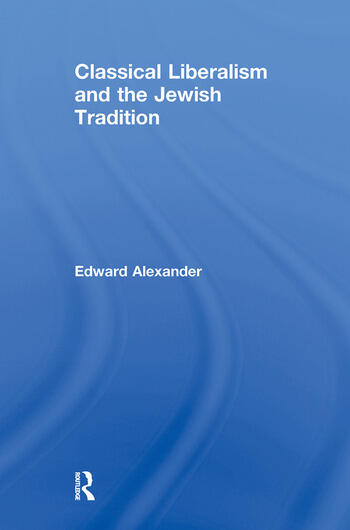 Classical Liberalism and the Jewish Tradition

The incongruence if not antagonism between modern liberalism and the Jewish sense of the world has been most notably articulated by Lionel Trilling. Certainly the imaginative limitations and intellectual smugness he discerned in his own ideological party found a parallel, in his view, in the embrace of liberalism by the American Jewish community. The consequences of that embrace entail both a superficial intellectual and religious culture and a misunderstanding of the social and political dimensions of Judaism. In Classical Liberalism and the Jewish Tradition, Edward Alexander engages in a wide-ranging exploration of the roots of the fundamental antagonism between liberalism and Jewish tradition from the nineteenth century to the present day.

Central to Alexander's arguments is his incisive critique of the distortion of modern Judaism as a child of the Enlightenment and the notion that specifically Jewish concerns, whether with Zionism, the Holocaust, or sacred and secular writings, constitute a narrow and parochial betrayal of liberal interests. The chapters are divided among political, religious, and literary subjects. The opening chapter on Mill's ambivalent attitude toward the Jews establishes terms of conflict between Judaism and liberal secularism and universality as do chapters on the antisemitism of Thomas Arnold and Marx and the more ambiguous Jewish self-identification of Disraeli.

Alexander examines such disparate topics as the hostility to the idea of a Jewish state on the part of numerous Israeli intellectuals, the disdain among liberals toward the specifically Jewish dimension of the Holocaust, and the capitulation of the Modern Language Association to the anti-Zionism of Edward Said. Turning to the uneasy status of Jewish religious texts and secular literature as sources of cultural revitalization, Alexander deals with the attempt by the Israeli scholar Adin Steinsaltz to bring the Talmud to the attention of contemporary Jewish readers and includes a chapter on his nineteenth-century precursor Emanuel Deutsch and his relationship to George Eliot. An analysis of Ruth Wisse's efforts to establish a modern Jewish literary canon is rounded out by chapters on two of the major figures of that canon: Isaac Bashevis Singer and Philip Roth.

While diverse in subject matter, Classical Liberalism and the Jewish Tradition is consistent in its unapologetic advocacy of a Jewish point of view and in its depth of scholarship in tracing the historical roots of contemporary attitudes and ideologies.