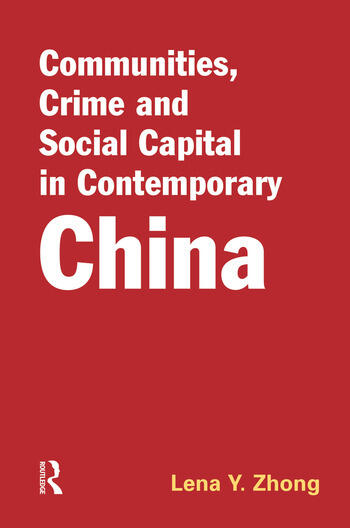 This book explores the theoretical and empirical dimensions of community crime prevention in China, examining in particular the role of social capital in a rapidly modernizing economic, social and political context. In doing so it provides a vivid picture of contemporary crime and crime control in China as well as analyzing the very particular Chinese approach to community crime prevention, looking at such social institutions as the household registration system, the neighbourhood committee, the work unit and the public security bureau.

The particular focus of this book is on BLSCC − Building Little Safe and Civilized Communities − in the city of Shenshen which has been undergoing rapid change. The book looks at two contrasting communities within the city, looking at their different characteristics and the differing ways in which social capital operates in relation to crime and crime prevention.

As well as shedding light on the hitherto largely hidden subject of crime prevention in China this book also makes an important contribution to wider debates about social capital and its potential, an invaluable study based on unique research.

'This book is a great example of contemporary social science. Its treatment of criminological theory in its application to contemporary China is both comprehensive and accessible. Its use of multiple research methods, including observation, depth interviews, surveys, and documentary analysis, is exemplary ... For those who are unfamiliar with Chinese culture and institutions of social control, this book is the place to start. It is a wonderful and fascinating introduction to contemporary Chinese society and to the problems of crime control that accompany it. The reader's attention will be richly rewarded.' − Professor Peter Grabosky, Regulatory Institutions Network, Australian National University

'Lena Zhong has skilfully brought to bear insights from Western social and criminological theory to illuminate crime control policy and practice in a part of China which has been undergoing rapid socio-economic and political change. Her subtle theoretical analysis and empirical research will undoubtedly be of great interest to the growing number of scholars who are developing a more sophisticated comparative criminology.' − Roger Hood, Professor Emeritus of Criminology, University of Oxford

'It is a methodologically ambitious study, which triangulates a range of research methods and sources of data.  The use of documentary analysis, observational techniques, in-depth interviews and surveys gives the reader a textured and nuanced narrative.  As well as being an exemplary empirical study, it is also a brave attempt to address some of the bias in western criminological theory...'

'This is an important contribution, which will be of interest to comparative criminologists...it deserves a much wider readership because it is a novel synthesis of theoretical and empirical material drawn from eastern and western sources.'
-Chris Crowther-Dowey, Senior Lecturer in Criminology, Nottingham Trent University, in the British Journal of Community Justice