Consciousness, Language, and Self
Psychoanalytic, Linguistic, and Anthropological Explorations of the Dual Nature of Mind 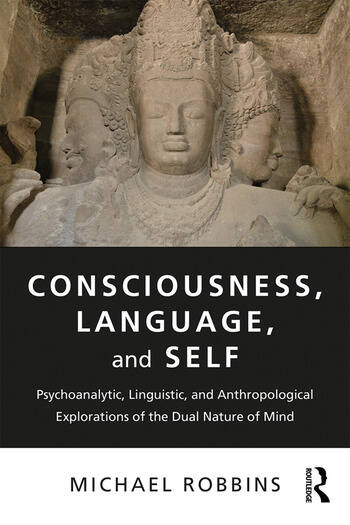 Consciousness, Language, and Self: Psychoanalytic, Linguistic, and Anthropological Explorations of the Dual Nature of Mind

Consciousness, Language, and Self proposes that the human self is innately bilingual. Conscious mind includes two qualitatively distinct mental processes, each of which uses the same formal elements of language differently. The "mother tongue," the language of primordial consciousness, begins in utero and our second language, reflective symbolic thought, begins in infancy.

Michael Robbins describes the respective roles the two conscious mental processes and their particular use of language play in the course of normal and pathological development, as well as the role the language of primordial consciousness plays in adult life in such phenomena as dreaming, infant-caregiver attachment, creativity, belief systems and their effects on social and political life, cultural differences, and psychosis. Examples include creative persons, extreme political figures and psychotic individuals. Five original essays, written by the author’s current and former patients, describe what they learned about their aberrant uses of language and their origins.

This book sheds new light on several controversies that have been limited by the incorrect assumption that reflective representational thought and its language is the only conscious mental state. These include the debate within linguistics about whether language is the expression of a hardwired instinct whose identifying feature is recursion; within psychoanalysis about the nature of conscious and unconscious mental processes, and within cognitive philosophy about whether language and thought are isomorphic.

Consciousness, Language, and Self

will be of great value to psychoanalysts, as well as students and scholars of linguistics, cognitive philosophy and cultural anthropology.

Preface; Introduction: The lay of the land; Chapter 1 Language and the sense of self Chapter 2: Two conscious mental processes and their languages Chapter 3: Theoretical background of the problem of mental process and consciousness Chapter 4: Fundamental manifestations of primordial consciousness: dreaming and the languages of mother-infant bonding Chapter 5: The relation of mental process and language: The controversy within linguistics Chapter 6: The relationship of language to thought and the sense of self Chapter 7: Belief systems and other everyday phenomenology of primordial consciousness and its language Chapter 8: Primordial consciousness, language, and cultural differences Chapter 9: Emergence of the bilingual sense of self during the attachment phase Chapter 10: What characterizes language aberration? Chapter 11: Language aberration in relation to pathology of early attachment Chapter 12: Clinical methodology and data/Patient essays Chapter 13: Caroline: Schizophrenese Chapter 14: Jane Chapter 15: Charles Chapter 16: Lisabeth Chapter 17: Jacob Chapter 18: Our languages and our selves: Discussion and conclusion

Michael Robbins is a psychoanalyst and was formerly professor of clinical psychiatry at Harvard Medical School and the University of California San Francisco. He is a member of the American and International Psychoanalytic Associations. His previous books include Experiences of Schizophrenia, Conceiving of Personality, and The Primordial Mind in Health and Illness: A Cross-Cultural Perspective.

'Michael Robbins develops a new way of looking at language and its dual psychological and sociological roles, one that emerges from his extensive clinical experience. The new proposals that he offers are interesting, exciting and novel. I know that I will come back to his work multiple times to contemplate these original proposals on language, consciousness, mental health, and psychological development. A welcome addition to the literature on human language and psychology.'
-Daniel L. Everett, Dean of Arts and Sciences at Bentley University; formerly Chair of the Department of Languages, Literatures and Cultures at Illinois State University; author of Don’t Sleep, There are Snakes.

'This is a book of striking originality and of great significance for psychoanalysts, psychiatrists, psychologists but also for all those who have sought to understand and articulate the way in which human beings communicate between themselves. Novelists, writers and those who lecture and speech makers will profit enormously from reading this book and absorbing deeply its message. Michael Robbins brings to light that there are two forms of communication between persons: representational language and primordial consciousness. To illustrate these two forms of communication I will take an example from my own experience. In London in the 70s I had an analysis five times a week with a little-known psychoanalyst. When I first approached him I was severely ill mentally. When the analysis was over I was a changed person. I was fit and well. That this came about through the analysis I have no doubt. But, what was it that my analyst communicated that had such a healing power? It was not his interpretations, that which he articulated in representational language but an inner spirit of generosity and wisdom which was not articulated in representational language but was infused in primordial consciousness. I had known this for some years but not until reading Michael Robbins’s book was I able to voice it in a form that made complete sense of my own experience but also held immediate conviction for me that this form of communication had an importance in daily social life that was relevant for writers, for literary critics, for speech makers and all who are concerned with how human messaging occurs in any culture or community.'
-

'Michael Robbins goes yet more deeply into his exploration of early mentation, which he first revealed to us in ‘Experiences of Schizophrenia’ and ‘The Primordial Mind in Health and Illness’. In ‘Consciousness, Language, and Self' he explores the hidden meaning of language in its normal and pathological forms.

Neurophysiology, psychoanalysis, infant research, relational theories and clinical experience are masterfully interwoven to form an intellectual tour de force that sheds new light on the exploration of the mental processes at the root of the sense of self. His patients’ essays offer unique empirical access to the mind’s most intimate and mysterious elements. Robbins’ creative yet rigorous study of language will guide the reader into the innermost part of the human mind.

This book is essential reading for every analyst interested in primitive mental states and psychosis, and all clinicians and practitioners’ and students of mental health will be enlightened by this vibrant and profound contribution."
-Riccardo Lombardi, author of ‘Formless Infinity. Clinical Explorations of Matte Blanco and Bion’ and ‘Body-Mind Dissociation in Psychoanalysis’

"Robbins, a psychoanalyst formerly on the faculty at Harvard Medical School, presents his bilingual theory of consciousness, consisting of two forms of conscious mental activity. The primordial consciousness or “mother tongue” (humans' first language) begins in utero and is characterized by body sensation and a sense of unity; it is undifferentiated and sociocentric and implies agency with a language of images. The second consciousness of this bilingual experience is that of reflective representational thought; beginning in infancy, this develops with mother-infant attachment and neural maturation. This thought process accompanies self-awareness and enables reflective symbolic thought. Robbins goes on to explore primordial consciousness as a separate entity—not a developmental stage—and illustrates its potential throughout life, setting the stage to compare and contrast various theories of consciousness and language, including aberrations. Julian Jaynes, Sigmund Freud, Melanie Klein, John Bowlby, Noam Chomsky, and Steven Pinker (among others) are discussed throughout. This will be a fascinating read for psychoanalysts but will also appeal to students and scholars in developmental psychology, consciousness studies, cultural anthropology, and linguistics. A clear, well researched text."
--J. Bailey, Caldwell Community College and Technical Institute