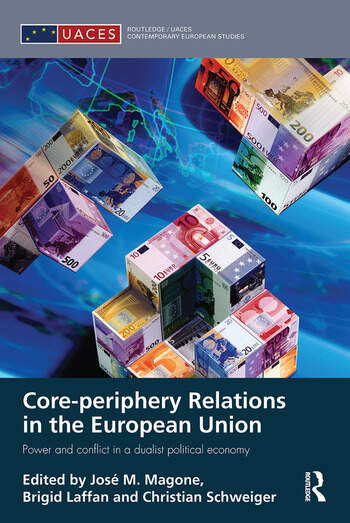 Core-periphery Relations in the European Union: Power and Conflict in a Dualist Political Economy

Successive Enlargements to the European Union membership have transformed it into an economically, politically and culturally heterogeneous body with distinct vulnerabilities in its multi-level governance.

This book analyses core-periphery relations to highlight the growing cleavage, and potential conflict, between the core and peripheral member-states of the Union in the face of the devastating consequences of Eurozone crisis. Taking a comparative and theoretical approach and using a variety of case studies, it examines how the crisis has both exacerbated tensions in centre-periphery relations within and outside the Eurozone, and how the European Union’s economic and political status is declining globally.

This text will be of key interest to students and scholars of European Union studies, European integration, political economy, public policy, and comparative politics.

1. The European Union as a dualist economy : Understanding core-periphery relations, José M. Magone, Brigid Laffan and Christian Schweiger PART I: Theoretical Perspectives 2. Core-periphery dynamics in the euro area: From conflict to cleavage? Brigid Laffan 3. The Centre-periphery divide in the eurocrisis: A theoretical approach, Angelos Sepos PART II: Comparative Approaches 4. National interests and differentiated integration In The EU under crisis conditions: The cases of Germany, France and Britain, Christian Schweiger 5. Will the centre hold? Germany, Ireland and Slovakia and the crisis of the European project, Stefan Auer 6. From ‘superficial’ to ‘forced’ Europeanization in southern Europe: The lack of ownership of national reforms, José M. Magone 7. Sociopolitical divisions in the European Union: Discourses of southern European representatives in the European institutions, Ignacio Paredero Huerta 8. The increasing core-periphery divide and the new member states: Diverging from the European Union’s mainstream developments, Attila Ágh 9. The southern and eastern peripheries of Europe: Is convergence a lost cause? Bela Galgoczi PART III: Country Studies on the Political Management of the Troika Adjustment Programmes and the Sovereign Debt Crisis 10. Greece and the Troika in the context of the eurozone crisis, Anna Visvizi 11. Confronting interrelated crises in the EU’s western periphery: Steering Ireland-EU relations back to the centre, Bernadette Connaughton 12. Portugal is a ‘good pupil of the European Union’. Living under the regime of the Troika, José M. Magone 13. Cyprus: The Troika’s new approach to resolving A financial crisis In a eurozone member state, Thorsten Kruse 14. The politics of troika avoidance: The case of Spain, José M. Magone 15. Italy Between Trasformismo And Transformative Europe, Marco Brunazzo and Vincent della Sala PART IV: Case Studieson the Impact of the Crisis on Non-Eurozones Member-States in the Periphery 16. The Hungarian agony over eurozone accession, Olivér Kovács 17. Peripheries, or perhaps already the centre? The impact of ten years of membership in the European Union on the position and perceptions of Poland, Maciej Duszczynsk PART V: The Global Dimension 18. From core to periphery? The impact of The crisis on the EU’s role in the world, Carolin Rüger 19. The undermining of ‘Global Europe’? The impact of the eurozone crisis on third country perceptions of the European Union, Edward Yencken

José M. Magone is Professor of Regional and Global Governance at the Berlin School of Economics and Law.

is Director and Professor at the Robert Schuman Centre for Advanced Studies, and Director of the Global Governance Programme, European University Institute (EUI), Florence.

is Senior Lecturer in the School of Government and International Affairs at Durham University.

"Is a core-periphery cleavage tearing the European Union apart? This timely book critically examines the transformation of political conflict in Europe in the wake of the Eurocrisis. José Magone, Brigid Laffan and Christian Schweiger have assembled a leading group of theoretical and empirical scholars to apply the core-periphery lens on the Eurocrisis. The collection provides a compelling explanation for the intensity of conflict, coalitional patterns, and declining policy effectiveness in the contemporary European Union. It shows how the Eurocrisis has exacerbated – rather than created – old core-periphery tensions, and how the EU institutions’ inability to diffuse these tensions is hastening Europe’s geopolitical decline. This path-breaking study will change our understanding of European governance. It is also a wake-up call for Europe’s leaders." – Liesbet Hooghe, University of North Carolina at Chapel Hill, USA.