Cultures of Defiance and Resistance
Social Movements in 21st-Century America 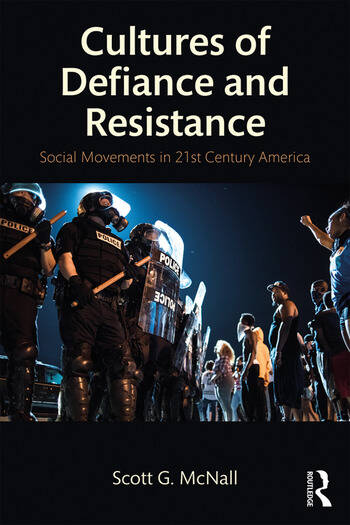 Cultures of Defiance and Resistance: Social Movements in 21st-Century America

How does one achieve a sense of freedom and meaning in a confusing, over-bureaucratized, and unequal world? Scott McNall offers the compelling case that we do so by taking a stand to protect our identities and values, and by taking further steps to create a sense of community with like-minded people. Modern social movements have sprung up on the right and left, to provide this sense of community, to seek explanations for why things are the way they are, and to discover what might be done in response. At this critical juncture in American society when divisions over race, class, gender, and government influence persist, movements allow their members to feel they are not trapped by their conditions.

Cultures of Defiance and Resistance

is an eye-opening account of the 'Antis' - those who stand in opposition to received wisdom and power, who resist the science of climate change, who reject vaccinations, who want to ban GMOs, and those who have resisted what they see as political or cultural oppression, such as Black Lives Matter, Occupy Wall Street, and the Tea Party. McNall masterfully explores the goals, narratives, and rhetoric used by groups on the left, right, and center to understand and cope with 21st century America in a time of mass discord, uncertainty, and hostility. In doing so, he reframes social movements for a new era in one of the first cross-comparative books reflecting the entire political spectrum.

Chapter 1: Cultures of Defiance and Resistance: The Search for Dignity and Respect in Twenty-First Century America

Chapter 2: The Battle in Seattle and Occupy Wall Street: The Meaning of Success and Failure

Chapter 3: Black Lives Matter: The Evolution of a Social Movement

Chapter 4: Cultures of Hyper-Masculinity: Guns, the NRA, and Militias

Chapter 6: The Body as the Last Line of Defense: The Fight Against GMOs

Chapter 7: The Revolution Will Not Be Tweeted, But It Can Be Organizaed

Scott G. McNall is Emeritus Provost and Professor at California State University, Chico (CSUC) and currently an affiliated Professor in the Department of Sociology at the University of Montana. He was the founding Executive Director of the Institute for Sustainable Development at CSUC. He lives with his wife, Sally, in Missoula, Montana.

For those trying to understand the upsurging popular resistance against established authority in 21st century America, Scott McNall’s Cultures of Defiance and Resistance is a "must read" book. He masterfully investigates "the Antis," which are new social movements from the left, right, and center of the ideological spectrum who resist almost any form of cultural, economic, governmental, scientific, and social authority. From anti-vaxxers to Black Lives Matter, or climate change denialists to the Sagebrush Rebellion, his analysis carefully explores how these new groups create identities, build communities, and mobilize resources for their defiant networks of opposition in an era that all too often seems meaningless, oppressive, and exploitative. - Timothy W. Luke, University Distinguished Professor, Virginia Polytechnic Institute and State University

McNall’s book will be the indispensable resource for Sociology courses in Social Movements, Social Problems, Political Sociology, and more. Students in my Social Movements class read pre-published chapters and found them to be provocative, well-sourced, memorable, and especially useful to their understanding of current and past events and movements. Highly recommended. - Janja Lalich, Ph.D., Professor Emerita of Sociology, Author of Escaping Utopia: Growing Up in a Cult, Getting Out, and Starting Over

Scott McNall, building on his work on social movements, and well known for his Rapid Climate Change, The Business of Sustainability, and The Problem of Social Inequality, has done it again in Cultures of Defiance and Resistance. Guided by a social movement theoretical framework, McNall provides a cogent analysis of important recent events such as 1999 Seattle WTO protests, Occupy Wall Street, the Tea Party, Black Lives Matter, right-wing movements, and the occupation of the Malheur National Wildlife Refuge. In addition to presenting the key social and historical contexts, he captures a lively ethnography of these events. In the concluding chapter on how to organize I especially liked the practical links to organizations provided, and his analysis of the limits of social media. A compelling and motivating read for sociology and political science courses. - Jeffrey A. Halley, The University of Texas at San Antonio

The current administration would have us believe that all problems facing us are simple and their solutions even simpler. With his book, Cultures of Defiance and Resistance: Social Movements in 21st Century America, Scott G. McNall lays out for us means by which the informed reader can access the complexity of problems facing us. Of equal, and maybe greater importance, McNall addresses the plurality, and often conflicting components, of proposed solutions offered from a wide range of interest groups. He accomplishes this without being didactic—informing, but leaving space for readers to find their own space. - James W. McManus, Professor Emeritus Art History, California State University, Chico

Scott McNall has written an important, timely, and innovative book that allows us to understand the social, political, and economic factors that have divided the country and given rise to a range of new movements on both the left and right. He clearly portrays the dynamics of movements driven by anger, anxiety, and fear that serve to enhance peoples’ sense of self-worth and belonging. He also explains what it will take for a progressive movement to succeed in today's political climate. - Kay Schaffer, Dean and Professor Emerita, Oregon State University