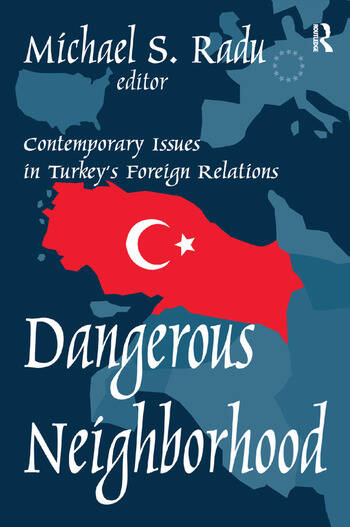 Contemporary Turkish politics have long been roiled by cultural and social debates rooted in the legacy of modernization initiated in the 1920s by Mustafa Kemal Atati?1/2rk. Islamist challenges to Ataturk's secularism, to political corruption and economic inefficiency, and debates over the meaning of human rights, all remain open to argument-in Ankara as well as elsewhere. Undoubtedly they exert influence on Turkey's position in world affairs and reinforce its double identity between the West and the Islamic world. Dangerous Neighborhood examines Turkish foreign policy problems, both with its immediate neighbors in the Caucasus and Middle East and in its essential strategic relations with the European Union and the United States. How important is Washington for Turkey's strategic interests, considering its controversial relations with the European Union? The Kurdish problem has affected Turkey's bid for EU membership, and also its relations with the United States as the war on terrorism is pursued. Are Turkish values and national interests, based on the legacy of Atati?1/2rk, compatible with minority rights, as defined by the European Union, and if not, why not? Moreover, is there any advantage to Turkey in joining the European Union, or is the price too high, relating to human rights concessions and legal issues? These important questions are examined in this volume. In the Caucasus, Turkey is an important factor, if for no other reason than its size and common borders. Turkey's role, whether Ankara likes it or not, remains important for both Russian ambitions and local ethnic groups seeking either autonomy or independence-Chechens, Abkhaz, Circassians, among others. Ankara's dilemma is whether to support co-nationals and co-religionists or to seek normal relations with Moscow. The solution to this dilemma is debated in this volume. In other parts of the world, Turkey also plays a central role. For example, Ankara's close military and political relations with Israel contribute to a different strategic and military balance in the Middle East. Turkey's views are seldom made public, and few Turks have believed it is important to present their case. This book, with contributors from Turkey as well as the West, is intended in part to broaden understanding of Turkey's position. Dangerous Neighborhood will be of interest to political scientists, foreign policy analysts, and Middle East specialists..