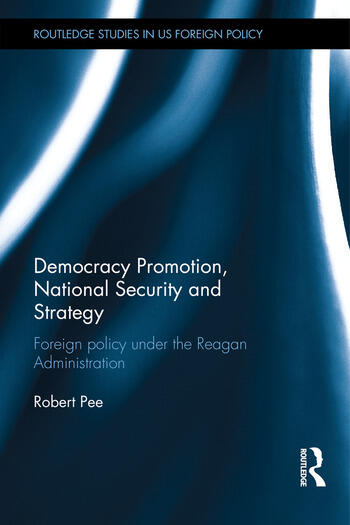 This book investigates the relationship between democracy promotion and US national security strategy through an examination of the Reagan administration’s attempt to launch a global campaign for democracy in the early 1980s, which culminated in the foundation of the National Endowment for Democracy in 1983.

Through a case study of the formation and early operations of the National Endowment for Democracy under the Reagan administration, based on primary documents from both the national security bureaucracy and the private sector, this book shows that while democracy promotion provided a new tactical approach to the conduct of US political warfare operations, these operations remained tied to the achievement of traditional national security goals such as destabilising enemy regimes and building stable and legitimate friendly governments, rather than being guided by a strategy based on the universal promotion of democracy.

Analysing the relationships between state agencies and non-state actors in the field of democracy promotion, and the strategic and organizational tensions which act to limit the promotion of democracy by the US, this book will be of interest to students and scholars of US Foreign Policy, Democracy Promotion and the Reagan Administration.

Robert Pee obtained his PhD at the University of Birmingham in 2013. His research interests focus on US national security strategy, democracy promotion and the role of non-state actors in the formation and implementation of US foreign policy.

‘Robert Pee delivers a carefully crafted, nuanced, and comprehensive study of the rise of democracy promotion as a critical component of US foreign policy under the Reagan administration. The analysis is insightful and sophisticated, offering an excellent understanding of the sources of tensions that animate US democracy promotion’s purpose and practices from its inception to the present days.’ Dr Jeff Bridoux, Lecturer in International Politics, Aberystwyth university, UK

"The uniqueness of this research is determined by its ability to bring together a series of related but different parts of the puzzle in examining democracy promotion…Robert Pee’s research monograph is an important contribution to the discussions of the Reagan administration’s foreign policy deliberations, policies, and implementations as well as the role of democracy promotion within that policy. It provides an important element to understanding the evolution of democracy promotion as we know it today." - Matthew Alan Hill, Liverpool John Moores University, The International Security Studies Forum, Roundtable 8-14

"Pee’s book is nuanced, thoroughly-researched, and astute in its analysis. It makes a valuable contribution not only to the literature on foreign relations, democracy promotion, and human rights policies during the Reagan administration, but to our understanding of contemporary foreign policy as well." - Lauren Turek, Trinity University, The International Security Studies Forum, Roundtable 8-14

"[Pee] does not force evidence to fit where it does not, and he neatly captures the messy process by which ideas can become policy, the porous boundary between state and the private sector, and the intensity of the interagency and interpersonal rivalries during the Reagan administration… I enjoyed reading this book and grappling with the ideas the author lays out. I especially encourage scholars interested in foreign policy during the Reagan administration to read it." - James Graham Wilson, Historical Office, Department of State, The International Security Studies Forum, Roundtable 8-14