Fathers Who Fail
Shame and Psychopathology in the Family System 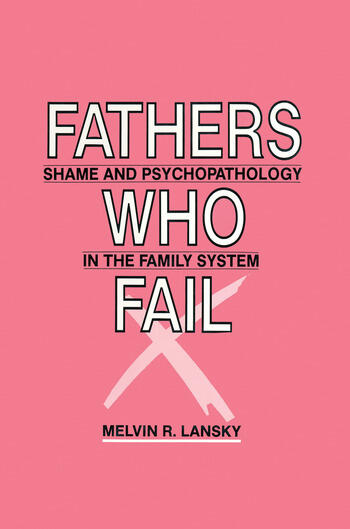 Fathers Who Fail: Shame and Psychopathology in the Family System

Despite the burgeoning literature on the role of the father in child development and on fathering as a developmental stage, surprisingly little has been written about the psychiatrically impaired father.  In Fathers Who Fail, Melvin Lansky remedies this glaring lacuna in the literature.  Drawing on contemporary psychoanalysis, family systems theory, and the sociology of conflict, he delineates the spectrum of psychopathological predicaments that undermine the ability of the father to be a father.  Out of his sensitive integration of the intrapsychic and intrafamilial contexts of paternal failure emerges a richly textured portrait of psychiatrically impaired fathers, of fathers who fail.

Lansky's probing discussion of narcissistic equilibrium in the family system enables him to chart the natural history common to the symptomatic impulsive actions of impaired fathers.  He then considers specific manifestations of paternal dysfunction within this shared framework of heightened familial conflict and the failure of intrafamilial defenses to common shame.  Domestic violence, suicide, the intensification of trauma, posttraumatic nightmares, catastrophic reactions in organic brain syndrome, and the murder of a spouse are among the major "symptoms" that he explores.  In each instance, Lansky carefully sketches the progression of vulnerability and turbulence from the father's personality, to the family system, and thence to the symptomatic eruption in question.  In his concluding chapter, he comments tellingly on the unconscious obstacles - on the part of both patients and therapists - to treating impaired fathers.  The obstacles cut across different clinical modalities, underscoring the need for multimodal responses to fathers who fail.

I: Introduction
1: Symptom,System, and Personality in Fathers Who Fail
II: General
2: The Paternal Imago
III: Defenses Against Shame: Narcissistic Equilibrium in the Family System
3: Shame in the Family Relations of the Borderline Patients
4:Blame in the Marital Triad
5: Preoccupation as a Mode of Pathologic Distance Regulation
6: The Explanation of Impulsive Action
7: The Borderline Father: Reconstructions of Young Adulthood
IV: Shame and Symptom Formation
8: The Psychiatrically Hospitalized Father libri
9: Violence, Shame, and the Family
10: Shame and Domestic Violence
11: Murder of a Spouse: A Family Systems Viewpoint
12: Shame and the Problem of Suicide: A Family Systems Perspectives
13: Escalation of Trauma in the Family of the Patient with Organic Brain Disease
14: Posttraumatic Nightmares and the Family (with Judith F. Karger)
V: Treatment Difficulties
15: Conflict and Resistance in the Treatment of Psychiatrically Hospitalized Fathers (with Ellen Simenstad)

Melvin R. Lansky, M.D., is Adjunct Professor of Psychiatry at UCLA Medical School.  He is founder and director of the Family Treatment Program at the West Los Angeles VA Medical Center and Training and Supervising Analyst at the Los Angeles Psychoanalytic Institute.  Among his numerous articles on topics in psychoanalysis, applied analysis, and family psychiatry, are prize-winning essays on the regulation of narcissistic equilibrium in families.

"Fathers Who Fail is an elegant exposition of one of the cardinal issues facing American families today: the role of the father in the origins and dynamics of family violence, including self-destructive behavior of family members.  Lansky writes in a clinically unique way.  His deep understanding of family dynamics is enriched by an even deeper appreciation of the complexities of achieving self-regulation and of transmitting values from one generation to the next.  By showing how the child's vision of his or her father ultimately depends on the child's own ability to discern the family myths that distort perceptions among family members, Lansky demonstrates how the child's early character formation is a product of the total family constellation, not just the nature of the mother-child dyad.  He thus redresses the tendency to blame mothers, a blind spot in the field for decades.  This book is mandatory reading not only for analysts, individual and family therapists, and developmentalists, but also for sociologists, critics, and lay readers intent on understanding the richly varied ways in which our images of fathers and fathering inspire and inform our social ideals and cultural institutions."

"In a series of essays both gripping and wise, Lansky identifies the powerful affect of shame as an organizing force in human affaris.  He clearly documents the lengths to which people will go to avoid feelings of humiliation and shame.  Defenses against these disorganizing emotions create serious problems internally and in family systems.  When viewed from this perspective, many puzzling intrapsychic and intimate relationship symptoms - alcohol abuse, suicidal despair, marital conflict, violence, and child abuse - can be decoded and made understandable.  The underrecognized problem of failed fathering in our culture is a theme that runs through this book.  Lansky describes how fathers who got little from their own fathers are unable to give to their own children; he most poignantly describes how these impaired fathers will do almost anything to avoid the shame and mortification of facing their inability to father their own children."

"Lansy's work is a supremely successful attempt at theoretical and clinical synthesis: he integrates in a series of original essays, which have been gathered into a coherent whole, his clinical experiences as a psychoanalyst and as a family therapist, as a theoretician at home in a number of traditions, and as a practitioner thoroughly familiar with several modalities of treatment.  Insightfully drawing on recent findings about the development and nature of affects, he places particular emphasis on integrating modern ideas about the role of shaming and blaming, both intrapsychically and interpersonally.  Fathers Who Fail is very highly recommended."