Fin de Siecle and Other Essays on America and Europe 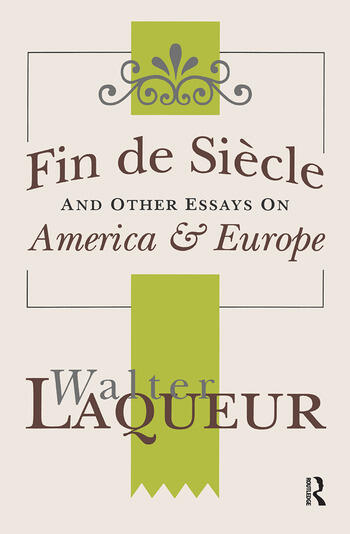 Fin de Siecle and Other Essays on America and Europe

The essays collected in Fin de Siècle and Other Essays on America and Europe cover the political and cultural spectrum of our time, specifically the rise, fall, and reemergence of radical movements of what was once called the extreme left and right. If the essays have a common denominator, it is that they do not join in the chorus of rejoicing after the end of the cold war. When the Soviet Empire collapsed and the cold war came to an end, there was a general celebration similar to the joy expressed after World Wars I and II. Walter Laqueur, in contrast to many of his peers, realized that Russia's and Eastern Europe's road to freedom would be, at best, protracted and arduous with many setbacks. And, as he shows, ten years after the reforms in the communist world, power, such as it is, is again in the hands of the communists, or of nationalists closely cooperating with communists. While they may not be old Stalinists, their style remains authoritarian, and no one can say for certain whether the conversion to democracy is lasting.Throughout Europe the extreme right has reemerged in force in France, Italy, Russia, and Austria these parties are among the strongest. While only a few years have passed since the demise of communism, there is already nostalgia among many in Russia with regard to the good old days, when vodka was cheap and order prevailed in the streets. In the West, the positive aspects of Nazism and fascism are being rediscovered. One might argue that it should have been obvious that the end of the cold war would in many ways create new and greater uncertainties rather than a new world order in international affairs. In certain nations, including the United States, there has been an unmistakable trend toward isolationism.How to explain such attitudes? In a brilliant assemblage of published and hitherto unpublished essays, Laqueur brings his concerns about these issues in a post-cold war environment. Essays include: "The Long Way to Europe," "Russian Nationalism," "In Praise of Menshevism," "The End of the Cold War," "Feuchtwanger and Gide," and "The Empire Strikes Out." Laqueur includes a profile of Andrei Sakharov, who played such a crucial role in the movement of democratic dissent in the Soviet Union. Fin de Siècle and Other Essays on America and Europe will be of significant interest to historians of European and American culture, sociologists, economists, and political scientists.