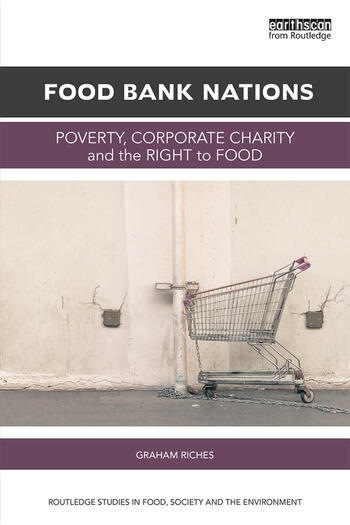 In the world’s most affluent and food secure societies, why is it now publicly acceptable to feed donated surplus food, dependent on corporate food waste, to millions of hungry people? While recognizing the moral imperative to feed hungry people, this book challenges the effectiveness, sustainability and moral legitimacy of globally entrenched corporate food banking as the primary response to rich world food poverty. It investigates the prevalence and causes of domestic hunger and food waste in OECD member states, the origins and thirty-year rise of US style charitable food banking, and its institutionalization and corporatization. It unmasks the hidden functions of transnational corporate food banking which construct domestic hunger as a matter for charity thereby allowing indifferent and austerity-minded governments to ignore increasing poverty and food insecurity and their moral, legal and political obligations, under international law, to realize the right to food.

The book’s unifying theme is understanding the food bank nation as a powerful metaphor for the deep hole at the centre of neoliberalism, illustrating: the de-politicization of hunger; the abandonment of social rights; the stigma of begging and loss of human dignity; broken social safety nets; the dysfunctional food system; the shift from income security to charitable food relief; and public policy neglect. It exposes the hazards of corporate food philanthropy and the moral vacuum within negligent governments and their lack of public accountability. The advocacy of civil society with a right to food bite is urgently needed to gather political will and advance ‘joined-up’ policies and courses of action to ensure food security for all.

3. The rise of Food Bank Nations

8. Collective Solidarity and the Right to food: moral, legal and political obligations

9. Public Accountability and the Right to Food: international monitoring to the rescue

Graham Riches is Emeritus Professor and former Director of the School of Social Work, University of British Columbia, Vancouver, Canada. As author and co-editor he has published widely on rich world domestic hunger, social policy and the right to food including Food Banks and the Welfare Crisis (1985); First World Hunger (1997) and First World Hunger Revisited (2014).

"I’m not sure how I missed this one when it came out.  It’s really good. It is a tough analysis of the politics of charitable food—the institutionalized use of corporate food waste to feed hungry people, largely in OECD countries but also in the U.S." Marion Nestle, https://www.foodpolitics.com/

"Riches provides a passionate insider’s account of the current system and politics of food banking in OECD countries … [T]his is a powerfully-written text, which makes essential reading for students and teachers of social policy and, indeed, activists seeking to understand how to reform the current food banking system in the rich nations of the world." - Rana Jawad, Journal of Social Policy, 2019

"This is a shocking book. Shocking in its contents; shocking in that it is needed now, more than ever; and shocking to me. I have worked on food, poverty, and policy response for nearly 40 years, yet so much here comes as new or into the sharpest possible focus.

Food Bank Nations is a passionately argued and evidenced polemic against the neoliberal capture of charitable response to local experiences of poverty, manifested as people ‘going hungry’, in some of the richest nations on earth. Graham Riches takes on the corporate invasion and capture of what is often portrayed as ordinary people - ‘good hearted folks’ - trying to help out their neighbours who aren’t able to feed themselves adequately by giving them food." - From the Foreword, Elizabeth Dowler, Emeritus Professor Food and Social Policy, University of Warwick, UK

"Against a backdrop of increasing food insecurity in OECD countries, Riches' examination of food banking reveals the extent to which ‘Big Food’ and privatized food charity have well and truly moved into the spaces left by retreating neoliberal governments. Beyond the food drives, celebrity endorsement, smiling volunteers and government legislated tax incentives, this book documents the juggernaut that is global food banking. Despite being a thorn in the side of many ‘primary duty bearers’, rights-based approaches to food offer promise as an effective counterweight to slow the progress of the foodbank juggernaut and reclaim public policy." - Dr. Sue Booth, Flinders University, Australia

"Graham Riches’ in-depth analysis of the way food banking has entrenched itself in the neoliberal agenda and public discourse calls for a change in ‘the conversation about domestic hunger from corporate charity to the right to food’. This book makes a significant contribution to this new conversation, arguing that civil society across OECD countries can and should hold the ‘indifferent States’ to account for their failure to ensure dignified access to good food for all when they so clearly have both the means and the duty to do so." - Pete Ritchie, Nourish Scotland, UK

"Can’t we do better than food banks? Graham Riches moves the needle from charity to the human right to adequate food and nutrition. He describes how capital-soaked transnational corporations monopolize public policy, blame poverty on the poor, and endorse themselves as the publically-subsidized solution. Riches’ alternative vision, rooted in social solidarity examples, rebuilds the social contract between civil society and its governments through democratically evolved plans, transparent monitoring, and the active participation and leadership of policies’ most affected publics." - Anne C Bellows, Professor Food Studies, Syracuse University, USA, and Board Member, FIAN International.

"Graham Riches's book is essential reading for anyone wanting to understand why problems of hunger and food insecurity are unabated in countries where food banks become established as the primary response." - Valerie Tarasuk, University of Toronto, Canada

"Graham Riches serves us all well with this analysis of modern food poverty. This book reminds us how the slow erosion of notions of welfare and decency, under the neo-liberal assault since the late 1970s, has created a world - even in rich countries - where charity and crumbs from the table now replace food justice. We should all read, consider, and then start planning how to win a better food system again." - Tim Lang, Professor of Food Policy, City, University of London, UK

"Food Bank Nations" is an up-to-date and important book for anyone dealing with issues of poverty, social exclusion and the transformation of welfare systems in rich industrial societies. A particular strength of the book is that it uses the Food Banks to trace the transnational developments of recent decades. It shows how volunteers, sponsors and government support continue to promote charitable food aid, which is mainly associated with the name "Food Banks" or "Tables" in Germany." - Dr. Stephan Lorenz, Prof. at the Jena Institute of Sociology, Friedrich-Schiller University, Germany

'..as Graham Riches documents in his important new book, Food Bank Nations: Poverty, Corporate Charity and the Right to Food, starting in the 1980s and continuing through today, many industrialized nations began making the same mistakes as the U.S. by increasing their societal reliance on food charities while reducing protections for workers and available social services' - Joel Berg, Hunger Free America