Foucault & the Politics of Hearing 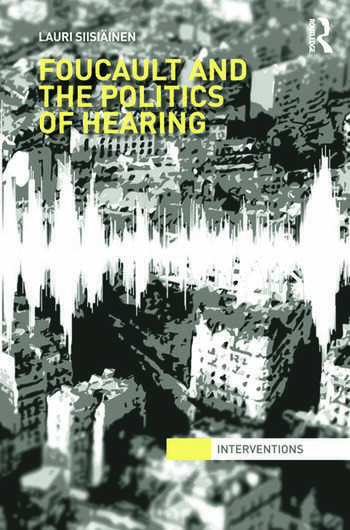 Foucault & the Politics of Hearing

The issue of the senses and sensual perception in Michel Foucault’s thought has been a source of prolific discussion already for quite some time. Often, Foucault has been accused of overemphasizing the centrality of sight, and has been portrayed as yet another thinker representative of Western ocularcentricism. This innovative new work seeks to challenge this portrait by presenting an alternative view of Foucault as a thinker for whom the sound, voice, hearing, and listening, the auditory-sonorous, actually did matter.

Illustrating how the auditory-sonorous relates most integrally to the most pertinent issues of Foucault - the intertwinement and confrontations of power, knowledge, and resistance - the book both presents novel readings of some of Foucault’s most widely read and commented-on works (such as Discipline and Punish, the first volume of History of Sexuality), and discusses the variety of his lectures, essays, and interviews, some of which have not been noted before.

Moving beyond a commentary on Foucault, Siisiainen goes on to examine other philosophers and political thinkers (including Roland Barthes, Jean-Luc Nancy and Jacques Rancière) in this context in order to bring to the fore the potentials in Foucault’s work for the generation of a new perspective for the political genealogy of the sound, hearing, and listening, approaching the former as a key locus of contemporary political struggles.

This work will be of great interest to students and scholars in a range of areas including political theory, philosophy, and cultural studies.

1.From the Empire of the Gaze to Noisy Bodies: Empirical Regimes and the Archaeology of Sound  2. From Panoptic to Panacoustic/Panauditory  3. Pastoral Power, Confession and Sexuality: Dispositives of Hearing and the "Sensualization of Power"  4. The Problem of Noise and the Governmentality of Sound  5. Music and the Politics of Friendship (Foucault and Boulez)  6. Voices of Multitude, Voices of Crowd: Foucault’s Final Voice?

Lauri Siisiainen is a researcher in the Department of Social Sciences and Philosophy at the University of Jyvaskyla, Finland.