Frank Tannenbaum
The Making of a Convict Criminologist 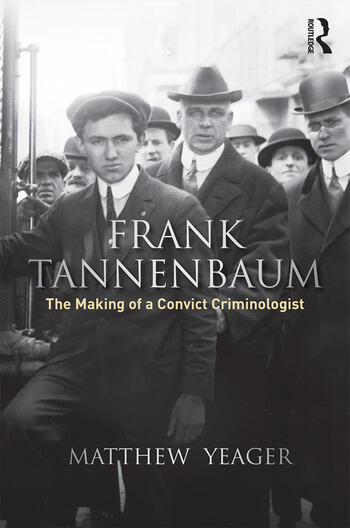 Frank Tannenbaum: The Making of a Convict Criminologist

Frank Tannenbaum and the Making of a Convict Criminologist is a historical biography about Columbia University professor Frank Tannenbaum and his contribution to American criminology. Tannenbaum was a major figure in criminology in the early twentieth century, and is known for his contributions to labeling theory, particularly his conception of the "dramatization of evil" presented in his 1938 book, Crime and Community. Tannenbaum served a year on Blackwell’s Island in New York City for labor disturbances in 1914 and subsequently became a prison reformer, writing about his experiences with the American penal system and serving as the official reporter for the Wickersham Commission’s study on Penal Institutions, Probation, and Parole in 1931. This book explores his unique early career, and his influence on convict criminology, drawing on his personal papers housed at the Butler Library at Columbia University.

Matthew G. Yeager is associate professor in the Department of Sociology at King’s University College, which is part of Western University in Canada. He obtained his bachelor’s degree in criminology from the University of California at Berkeley in 1972 and a master’s degree in criminal justice from the State University of New York at Albany in 1975. After spending the next thirty years working as a clinical criminologist and prisoners’ advocate in various courts and prisons across North America, in 2006, Yeager finished a doctorate in sociology from Carleton University, Ottawa, Canada. He is the author of more than thirty articles, covering topics such as offender recidivism, state crime, organized crime, and historical studies. He lives with his family in London, Ontario.

In 1914, Frank Tannenbaum, then in his early twenties, was sentenced to a year’s stay on New York’s Blackwell Island, the site of a notorious penitentiary. Tannenbaum was sentenced to prison for his labor organizing activities. In short order, Tannenbaum, who frequently hung out at Emma Goldman’s Mother Earth offices, came into the company of such prison reformers as Thomas Mott Osbourne, E. Franklin Stagg, and Harry Elmer Barnes.  These men and others helped him enter Columbia University where he studied political science while pursuing penal reform ideas that emerged from his experience as a convict on Blackwell Island. Eventually, Tannenbaum visited over 70 prisons across the country, including in the South and West, and produced a series of landmark studies, including Wall Shadows (1922), Darker Phases of the South (1924), Osbourne of Sing Sing (1933), and Crime and the Community (1938).

In this slim volume, Matt Yeager, a criminologist at King’s University College in London, Ontario, expands upon a Prison Journal article published several years ago. As Yeager deftly points out, Tannenbaum’s career as a prison reformer-criminologist was comparatively short-lived. In one of the many personal notes Yeager culled from Tannenbaum’s archival resources at Columbia’s Butler Library, Tannenbaum, whose interest in Mexico and Latin American dominated the later stages of his life, claimed that his incarceration guided his interest in prison reform. Deeply involved with his own experiences, he delved equally as deeply into prison conditions, prison discipline, prison administration, and prison reform. Heavily influenced by Thomas Mott Osbourne, Tannenbaum long adhered to the ideals of prisoner self-governance. He never felt that prisons were feasible. Mirroring other reformers of the period, Tannenbaum was not a prison abolitionist, but rather felt that prisons could be radically reorganized, leaving oppressive prison cellblocks in the past.

Tannenbaum’s theoretical criminology was a slight, but significant precursor of labelling theory, later pushed by the likes of Howard Becker, Edwin Lemert and others. Instead, Tannenbaum’s strength was a straight-forward critique of the external housing and internal disciplining of prisoners. Having been one of them, he saw convicts as human beings.

Tannenbaum was an early exemplar, and maybe the first, of "convict criminology," the contemporary (organized) emergence of a school of criminologists who generally started their criminological careers while incarcerated as juveniles or adults. Yeager’s history of Tannenbaum’s political activism, penal reform, and public intellectualism is well-suited for current discussions of prison reform, especially in this era of mass incarceration. Plus, Yeager’s discoveries in the Columbia archives make for some exciting reading. In reminding us of Tannenbaum’s legacy, he has done good service.