From Mathematics to Philosophy (Routledge Revivals) 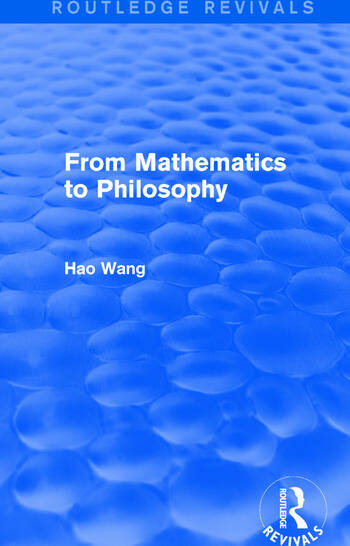 From Mathematics to Philosophy (Routledge Revivals)

First published in 1974. Despite the tendency of contemporary analytic philosophy to put logic and mathematics at a central position, the author argues it failed to appreciate or account for their rich content. Through discussions of such mathematical concepts as number, the continuum, set, proof and mechanical procedure, the author provides an introduction to the philosophy of mathematics and an internal criticism of the then current academic philosophy. The material presented is also an illustration of a new, more general method of approach called substantial factualism which the author asserts allows for the development of a more comprehensive philosophical position by not trivialising or distorting substantial facts of human knowledge.

Preface; A note on the text; Introduction; 1 Substantial factualism as a method and an antidote 2 Against positivism 3 Against linguistic philosophy 4 Explanatory remarks on substantial factualism 5 Logic, mathematics, and the scope of this book; I Mathematical Logic and philosophy of mathematics; 1 Topics in the philosophy of mathematics 2 The axiomatic method and abstract structures 3 Questions of consistency 4 The deceptive appeal of mathematical logic to philosophers Notes; II Characterization of general mathematical concepts; 1 Natural numbers 2 The continuum 3 Mechanical procedures; III Russell’s logic and some general issues; Principles (1903) 2 Preludes to Principia (1903-10) 3 Principia 4 Wittgenstein and Ramsay 4 Logical truth and other philosophical matters 6 Predictive definitions and the vicious-circle principle Notes; IV Logical truth; 1 Presuppositions of Aristotle’s logic 2 Logical constraints and logical truths; V Metalogic; 1 Formal languages and formal systems 2 Origins and influences of metalogic 3 Exact results on formal mathematical systems 4 Exact results of logical calculi; VI The concept of the set; 1 The (maximum) iterative concept 2 Bankruptcy (contradiction) or misunderstanding (error)? 3 Objectivism and formalism set in theory 4 New axioms and criteria of acceptability 5 Comparisons with geometry and physics 6 Digression on unbounded quantifications 7 Extracting axioms of set theory from Cantor’s writings 8 The hierarchies of Cantor and Mirimanoff Notes; VII Theory and practice in mathematics; 1. Activity and feasibility 2 Reducing mathematics to logic 3 What is mathematics? 4 Practical aspects of mathematics Notes; VIII Necessity, analyticity, and apriority; 1 Homes and assimilations of the three concepts 2 Suggestions from Kant’s philosophy 3 From Frege to analytic philosophy 4 Notes on contemporary discussions Notes; IX Mathematics and computers; 1 New uses of computers 2 Influence of mathematics on the development of computers 3 Logical mathematics 4 Mathematical reasoning as mechanical 5 Finite computations and infinite mathematics 6 Logic and computers; X Minds and machines; 1 Aspects of mechanism 2 Computers and brains 3 Artificial or mechanical intelligence 4 Computer simulation of human thought 5 Protocols and theoretical psychology 6 Mathematical arguments 7 Gödel on minds and machines Notes; XI Notes on knowledge and life; 1 Intrinsic goals and large problems 2 Relevance and forms of life 3 Specialization and the unity of knowledge 4 Bertrand Russell as an example 5 Life and the pursuit of philosophy Notes; XII Themes and approaches; 1 Scientific studies of matter, mind, and machines 2 Science and philosophy 3 Remarks on contemporary philosophy 4 Respect for gross facts 5 Looking beyond; Appendix Exercises in Criticism; 1 Notes on the justification of induction 2 On scepticism about induction 3 The existence of material objects 4 A question of knowledge of knowledge 5 What is an individual?; Notes; Index