Gender Equality, Citizenship and Human Rights
Controversies and Challenges in China and the Nordic Countries 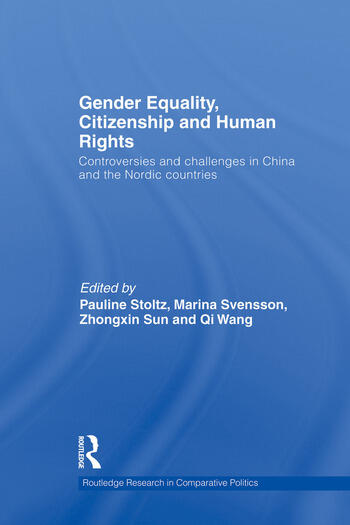 Gender Equality, Citizenship and Human Rights: Controversies and Challenges in China and the Nordic Countries

This comparative volume examines the ways in which current controversies and political, legal, and social struggles for gender equality raise conceptual questions and challenge our thinking on political theories of equality, citizenship and human rights.

Bringing together scholars and activists who reflect upon challenges to gender equality, citizenship, and human rights in their respective societies; it combines theoretical insights with empirically grounded studies. The volume contextualises feminist political theory in China and the Nordic countries and subsequently puts it into a global perspective. It tackles a complex set of tensions across a dense and shifting landscape and addresses issues including labour, health, democracy, homosexuality, migration and racism.

By cutting across geographical and disciplinary boundaries, this book will be of interest to students and scholars of comparative politics, gender studies, human rights and also those interested in Scandinavian and Asian politics.

1. Introduction: Rights and Responsibilities in a Gendered World Pauline Stoltz and Marina Svensson  Part 1: Controversies and Challenges  2. Introduction to Part 1 Pauline Stoltz  3. ‘It is the People who Serve the Government’: Interview with Ai Xiaoming Cecilia Milwertz  4. ‘Today all the Discussions and all the Conflicts are about Intersectionality’: Interview with Tiina Rosenberg Pauline Stoltz and Marina Svensson  5. Women’s Rights in China: Moving Beyond the Limits of Law Sharon Hom  6. Gender, Diversity and Trans-National Citizenship Birte Siim  Part 2: Case studies  7. Introduction to Part 2  Pauline Stoltz  8. Speaking Out and Space Making: The Emergence of Gay Identities and Communities in China Zhongxin Sun  9. Privileged Irresponsibility, Structural Responsibility and Moral Contradictions among Employers in the EU Domestic Work Sector Anna Gavanas  10.The Safety and Health of Female Migrant Workers in China Tan Shen  11. National Implementation of Human Rights: A Threat to Representative Democracy? Hege Skjeie  12. Gender Equality and Human Rights: The International Covenant on Civil and Political Rights and China Liu Huawen  13. Globalization, Diaspora Politics and Gender: Muslims in Sweden Catarina Kinnvall

Pauline Stoltz (FD) is senior lecturer in political science at Malmö university, Sweden. Her research focuses on notions of citizenship and equality, notably as these concern categories of people who are marginalised according to gender, ‘race’ and religion in European societies. A special focus concerns children as citizens in European welfare states and the role of education in welfare state transformations. Her publications include amongst others About Being (T)here and Making a Difference –Black Women and the Paradox of Visibility (2000); ‘Politisk Solidaritet’ in Maktens (o)lika förklädnader – Kön, klass och etnicitet i det

postkoloniala Sverige, eds. Paulina de los Reyes, et al. (2002, new ed 2005 and 2006). She is currently working on a book on Children as citizens – Equality, Welfare and Education in Transition. Stoltz has been a visiting scholar at the University of Leeds in the United Kingdom.

Marina Svensson is an associate professor at the Centre for East and Southeast Asia Studies, Lund University, Sweden. Her research focuses on legal and social issues in China. Among her recent publications are Making Law Work: Implementation of Law in China (forthcoming, co-editor with Mattias Burell), Debating Human Rights in China: A Conceptual and Political History (Rowman and Littlefield, 2002), The Chinese Human Rights Reader (M. E. Sharpe, 2001, co-editor with Stephen C. Angle), and "Fieldwork in Context," in Maria Heimer and Stig Thögersen eds. Fieldwork in China Hawaii University Press and NIAS Press, 2006.

Qi Wang is lecturer at the Department of Culture Studies and Oriental Languages, University of Oslo, Norway. She holds a PhD degree in political science and has done postdoctoral research on women’s political participation and gendered aspects of Chinese politics in both Denmark and Sweden. Her main publication includes an edited anthology on Gender Politics in Asian (with Cecilia Milwertz, Wil Brughorn and Kazuki Iwanaga), which is forthcoming; a working paper titled "Renegotiating Gender and Power: Women’s Organizations and networks in Politics -The China Women Mayors’ Association", published by the working

Zhongxin Sun is Associate Professor of sociology at Fudan University and research fellow for the Nordic Center, Human Rights Center, and the Center for Gender Studies of Fudan. Currently, she is a visiting scholar at Harvard University, working on research projects on social inequalities, gender and sexuality issues in Contemporary China. Her academic publications are on gender, sexuality, youth culture, urban culture, feminist research methods, family, globalization and labor, social stratification and inequality. Her recent publications include a book Feminist Research Methods, co-edited with Lili Zhang (Fudan University Press, 2007), a paper "Shaping Perceptions of Shanghai: Discourses, Images, and Visions" in the book "The Making of Global City Regions: Johannesburg, Mumbai/Bombay, São Paulo, and Shanghai", edited by Klaus Segbers (The Johns Hopkins University Press, 2007), a paper "Redefining Chinese Female Identity In the Workplace: Gender, Class and Motherhood in Foreign Companies", in Making it in China, edited by Merete Lie, Ragnhild Lund and Gard Hopsdal Hansen( Norwegian Academic Press, 2008 ), and a paper on gender issues in China in a book titled Women and Politics around the World: A Comparative History and Survey, edited by Joyce Gelb and Marian Lief Palley ( ABC-CLIO, will be out in 2008). Besides, she published a number of papers in English and Chinese journals, such as the China Journal, China Perspective, and Fudan Journal, Gender, Thinking, Society, Sociology, Women’s Research Forum, Tsinghua Education Review, etc.