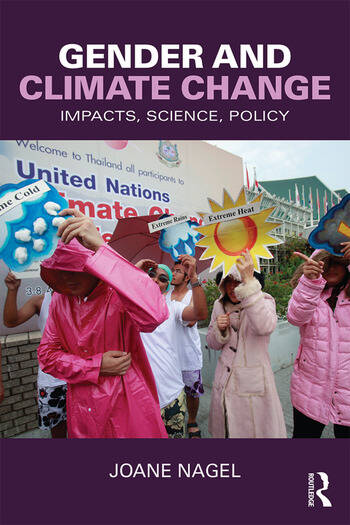 Does gender matter in global climate change? This timely and provocative book takes readers on a guided tour of basic climate science, then holds up a gender lens to find out what has been overlooked in popular discussion, research, and policy debates. We see that, around the world, more women than men die in climate-related natural disasters; the history of science and war are intimately interwoven masculine occupations and preoccupations; and conservative men and their interests drive the climate change denial machine. We also see that climate policymakers who embrace big science approaches and solutions to climate change are predominantly male with an ideology of perpetual economic growth, and an agenda that marginalizes the interests of women and developing economies. The book uses vivid case studies to highlight the sometimes surprising differential, gendered impacts of climate changes.

Joane Nagel, Distinguished Professor of Sociology at the University of Kansas, is the author of Race, Ethnicity, and Sexuality: Intimate Intersections, Forbidden Frontiers.

"The book reveals how fundamental an understanding of gender is to appreciating how climate change is produced, experienced and addressed. With the world at such a pivotal moment in determining how it should respond to climate change in order to avert catastrophe, Joane Nagel has provided a departure point for those engaged in studying and making decisions on climate change, as well as those challenging these decisions, to consider the central role of gender in this ‘greatest threat to rights in our time’"—  Susan Buckingham, Gender & Development

"The 'gendered face of climate change' is brought into focus by Nagel (sociology, Univ. of Kansas). The author provides powerful evidence of relative gender vulnerability to sea level rise in extreme weather events and droughts—such as melting sea ice and changing coastlines. Beyond the impact of climate change, Nagel reveals the gendered bias of the military-science complex and climate change science, a male-dominated field from the developed world. She maintains that “human” universalism, as used by climate scientists, infers objectivity that belies inequality among humans. Consistently referring to “human” ignores “unequal inputs as well as unequal impacts within and across populations,” linked to factors of race, class, gender, and political and economic power. Nagel highlights that 'we do not all equally contribute to the problem, nor are we all going to have the same experience of climate change.' More than 500 endnotes and citations demonstrate thorough investigation of appropriate scholarly sources. The index includes personal and place-names, as well as concepts (e.g., tipping point, carbon sequestration, ecological footprint, etc.). The work concludes with important observations on 'engendering climate change justice' to better address multifaceted climate change challenges. Summing Up: Recommended. All readers." --A. S. Ricker, Oberlin College in CHOICE

"Joane Nagel focuses her keen sociological eye on the intersection of gender and climate change, and the result is an exceptionally insightful analysis of topics such as women’s greater vulnerability to a warming world, male domination of climate science and resulting blindspots, and the need for women having a greater voice in climate change policy-making. Her volume provides a superb example of the value of sociological insights into climate change."
—Riley E. Dunlap, Dresser Professor and Regents Professor of Sociology, Oklahoma State University

"We have waited a long time for a book this good—hard-hitting and analytic, amply supported empirically yet accessible to generalists, and fine-grained enough to bring these critical issues to life. What an accomplishment!  Nagel deftly synthesizes a wide range of multidisciplinary research to persuasively argue that yes, gender and climate change are connected—and why gender justice and climate justice are inextricably linked."
—Elaine Enarson, Independent Scholar

"Nagel offers an original and compelling take on climate change that will attract a major popular and scholarly audience, including teachers and students in a wide range of courses. She documents intriguing and tragic disproportionate impacts of climate on women, as well as the male-dominated profile of the fossil fuel industry and climate deniers. While her findings don't obscure the universal threat to both genders, they make clear that if you care about women you must urgently work to stop climate change, and that women will help lead resistance to the economic and military forces wreaking havoc on our environment."
—Charles Derber, author of Greed to Green: Solving Climate Change and Remaking the Economy and The Disinherited Majority: Capital Questions—Piketty and Beyond