Global Perspectives on Football in Africa
Visualising the Game 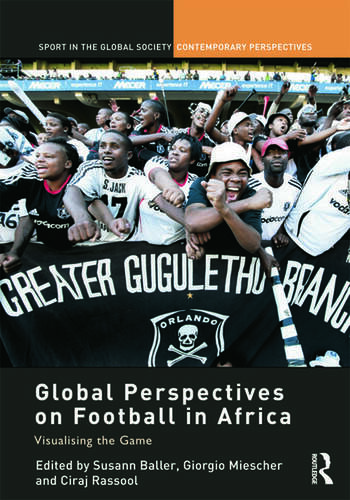 Global Perspectives on Football in Africa: Visualising the Game

Football, in many ways, is a visual endeavour. From the visual experience within the stadium itself to worldwide media representations, from advertisements to football art and artefacts: football is much about seeing and being seen, about watching, making visual and being visualised. The FIFA World Cup 2010 in South Africa has turned into a perfect example of the visual dimensions of football. Stadiums have been built and marketed as tourist attractions, mass media and internet platforms are advertising South African cities and venues, logos and emblems are displayed and celebrated, exhibitions are organised in museums world-wide.

This book explores the social, cultural and political role of football in Africa by focusing on the issue of its visibility and invisibility. The contributions consider the history and present of football in different parts of Africa. They examine historical and recent pictures and images of football and football players, as well as places and spaces of their production and perception. They analyse the visual dimensions expressed in sports infrastructure, football media-scapes, and in expressive and material arts. This book thus contributes to the growing interest in football in Africa by exploring a new field of research into sports.

This book was previously published as a special issue of Soccer and Society.

1. Visualizing the game: global perspectives on football in Africa  2. Representation in the first African World Cup: ‘world-class’, Pan-Africanism, and exclusion  3. Visualising modernity: development hopes and the 2010 FIFAWorld Cup  4. ‘Fields of Play’: the District Six Museum and the history of football in Cape Town  5. The African footballer as visual object and figure of success: Didier Drogba and social meaning  6. Football imagery and colonial legacy: Zaire’s disastrous campaign during the 1974 World Cup  7. Envisioning and visualizing English football in East Africa: the case of a Kenyan radio football commentator  8. Visualizing politics in African sport: political and cultural constructions in Zimbabwean soccer  9. Black chicken, white chicken: patriotism, morality and the aesthetics of fandom in the 2008 African Cup of Nations in Ghana  10. Visualizing African football in apartheid Namibia: photography, posters and constructions of consumers and nationalism  11. Visualizing the game: the iconography of football on African postage stamps  12. Football and the representation of history: the Senegalese 2002 ‘success story’ in football cartoons and advertisements

Susann Baller is a senior lecturer in African history at the University of Basel. She has published her dissertation on "Playing Fields of the City: Football and Youth Politics in Senegal since the 1950s" (Böhlau 2010) as well as several articles in major academic journals on sports, youth and urban history. She is member of the steering committee of the German African Studies Association.

Giorgio Miescher is currently a Marie Curie research fellow at the Centre for African Studies of the University of Basel, Switzerland, and the Centre for Humanities Research of the University of the Western Cape, South Africa. He works on a project entitled Empires of the Visual, which looks at the visualisation of imperial space in Southern Africa in the 20th century. Between 1994 and 2011 Giorgio Miescher worked at the Basler Afrika Bibliographien as a curator of the poster collection and as a researcher. Likewise he has taught intermittently at the History Department of the University of Basel.

Ciraj Rassool is professor of history and director of the African Programme in Museum and Heritage Studies at the University of the Western Cape. He chairs the board of the District Six Museum and also serves on the boards of Iziko Museums of South Africa the South African History Archive. He is co-author or co-editor of five books about museums, collecting and public culture including Recalling Community in Cape Town: Creating and Curating the District Six Museum (2001), Museum Frictions: Public Cultures/Global Transformations (2006) and Popular Snapshots and Tracks to the Past: Cape Town, Nairobi, Lubumbashi (2010).