God, Jews and the Media
Religion and Israel’s Media 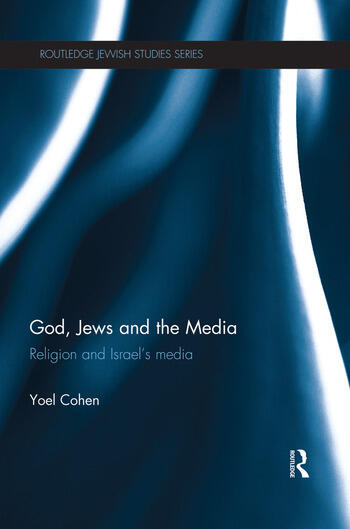 God, Jews and the Media: Religion and Israel’s Media

In order to understand contemporary Jewish identity in the twenty-first century, one needs to look beyond the Synagogue, the holy days and Jewish customs and law to explore such modern phenomena as mass media and their impact upon Jewish existence. This book delves into the complex relationship between Judaism and the mass media to provide a comprehensive examination of modern Jewish identity in the information age.

Covering Israel as well as the Diaspora populations of the US and UK, the author looks at journalism, broadcasting, advertising and the internet to give a wide-ranging analysis of how the Jewish religion and Jewish people have been influenced by the media age. He tackles questions such as:

Chapters explore how the impact of Judaism is to be found particularly in the religious media in Israel – haredi and modern Orthodox – and looks at the evolution of new patterns of religious advertising, the growth and impact of the internet on Jewish identity, and the very legitimacy of certain media in the eyes of religious leaders. Also examined are such themes as the marketing of rabbis, the `Holyland’ dimension in foreign media reporting from Israel, and the media’s role in the Jewish Diaspora.

An important addition to the existing literature on the nature of Jewish identity in the modern world, this book will be of great interest to scholars of media studies, media and religion, sociology, Jewish studies, religion and politics, as well as to the broader Jewish and Israeli communities.

Yoel Cohen is Associate Professor, School of Communication, Ariel University Center, Israel (School Chairman 2009-2011). His research interests include media and religion in Israel and Judaism; religion and news; and news reporting. He completed a doctorate at City University London. His other publications include include Whistleblowers and the Bomb: Vanunu, Israel and Nuclear Secrecy,;The Whistleblower of Dimona: Vanunu, Israel & the  Bomb; and Media Diplomacy: the Foreign Office in the mass communications age (Frank Cass). His research has appeared in the Harvard International Journal of Press/Politics; Gazette; Journal of Media & Religion; Israel Affairs; Review of International Affairs; Encyclopaedia of Religion, Communication & Media amongst others.

“Cohen has made an important contribution to the field of Religion and Communication. This example should stimulate researchers from other religions to enter the field as well.” - Dr Franz-Josef Eilers, St John’s University, Bangkok;  Journal of the Asian Research Center for Religion & Social Communication, Vol 10 No 2 2012

“Yoel Cohen offers  a close to perfect overview of every possible aspect of religious themization in public discourse in israel and the Jewish diaspora” - Professor Johannes Ehrat SJ; Journal of the Gregorian Pontifical University, Rome, Volume 94, 2013.

“God,  Jews & the Media is rich in important information, and makes a significant contribution to a discipline still in its infancy.” - Dr Michele Rosenthal

“Yoel Cohen’s book  is a welcome contribution to our understanding of the complex relationship between religion and media in Israel. “ - Media Comment: God in the newsroom, Jerusalem Post 25.10.2012

“By providing readers with detailed information regarding public figures , various streams within the national religious and haredi sectors together with insights into the role of the religion report in Israel, Cohen has managed to produce a work that will allow its readers to become better consumers of news”  - Saul Sokol,  Jerusalem Post 23.12.2012

"The book certainly makes a useful addition to the growing scholarship on the relationship between Jews, Judaism and new media and digital culture." - Nathan Abrams, Bangor University, UK; The Journal of Religion, Media and Digital Culture, June 2013.

"Yoel Cohen has tried to construct a comprehensive scholarly framework to accommodate the many ways that Judaism and the Israeli media, secular and religious, interact with each other." - The Jerusalem Report, July 30th 2012

'God, Jews and the Media: Religion and Israel’s Media demonstrates Professor Cohen’s encyclopedic familiarity with the subject. It is clearly required reading for anyone interested in learning about issues relating to religion and the media in Israel. One would hope that any journalist wishing to write about religious issues in Israel would read it as well.' - Haim Shapiro, Jewish Political Studies Review 2013.

"However, this work clearly is a good addition to resources to consider for religion, Jewish studies, or communication studies programs in higher education." - Paul Fehrmann, Kent State University Journal of Religious and Theological Information.