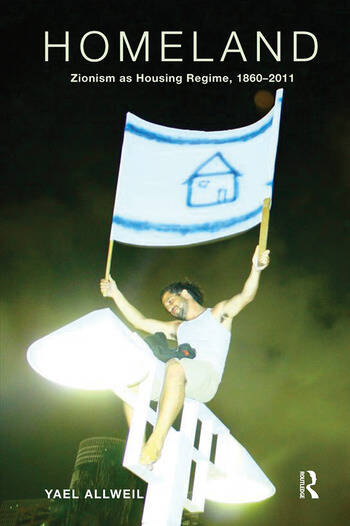 On 29 March 2016 the New York based online journal, Realty Today reported ‘Israel is facing a housing crisis with …[the] home inventory lacking 100,000 apartments… House prices, which have more than doubled in less than a decade, resulted in a mass protest back in 2011’.

As Yael Allweil reveals in her fascinating book, housing has played a pivotal role in the history of nationalism and nation building in Israel-Palestine. She adopts the concept of ‘homeland’ to highlight how land and housing are central to both Zionism and Palestinian nationalism, and how the history of Zionist and Palestinian national housing have been inseparably intertwined from the introduction of the Ottoman Land Code in 1858 to the present day.

Following the Introduction, Part I, ‘Historiographies of Land Reform and Nationalism’, discusses the formation of nationalism as the direct result of the Ottoman land code of 1858. Part II, ‘Housing as Proto-Nationalism’ focuses on housing as the means to claim rights over the homeland. Part III, ‘Housing and Nation-Building in the Age of State Sovereignty’, explores the effects of statehood on national housing across several strata of Israeli society. The Afterword discusses housing as the quintessential object of agonistic conflict in Israel-Palestine, around which the Israeli polity is formed and reformed.

Introduction: Home-Land: The Historigraphy of a Blind Spot, Part I: Housing Outside City Walls: New Forms of Sovereignty in Late Ottoman Palestine, 1. Empire Land Commodification and the Backlash of Nationalism, 2. Experimentation in Housing for Nationalism, 1858–1917, Part II: Housing for Proto-Nationalism, 3. ‘New Native’ Palestinian Housing: Plantation as Backdrop for Nationalism 1858–1948, 4. ‘Houses Before Street’: Tel Aviv’s Housing Based Urban Planning by Weiss and Geddes, 1909–1925, 5. ‘Today’s Child is Tomorrow’s State’: Kibbutz Children’s House as Nursery for the Good Zionist Subject, 1922–1948, Part III: Housing and Nation-Building in the Age of Sovereignty, 6. Immigrant Housing and the Establishment of the State–Citizen Contract, 1948–1953, 7. ‘Resistance to Being Swept Away’: Summud Arab-Palestinian Housing in Israel, 1948–2004, 8. Differentiated Citizenship in Differentiated Housing, 1948–2005, 9. Afterword: For the Nation Yet to Come

Yael Allweil is an Assistant Professor in the Faculty of Architecture and Town Planning at the Technion, Haifa, Israel. Her research centres on the history of housing in Israel and Palestine and the struggles over urban public spaces.