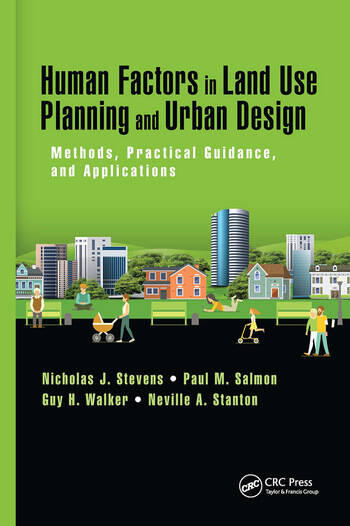 The integration of Human Factors in Land Use Planning and Urban Design (LUP & UD) is an exciting and emerging interdisciplinary field. This book offers practical guidance on a range of Human Factors methods that can be used to rigorously and reliably explore LUP & UD.

It provides new ways to interpret urban space and detail context sensitive analysis for the interpretation and design of our surroundings. The methodologies outlined allow for the consideration of the technical aspects of the built environment with the necessary experience and human centered approaches to our urban and regional settings.

Nicholas J. Stevens is a Landscape Architect and Urban Planner. He is the Deputy Director of the Centre for Human Factors and Sociotechnical Systems at the University of the Sunshine Coast, where he leads the Land Use Planning and Urban Design Research Theme. He is also the Program Leader for the Bachelor of Urban Design and Town Planning (Honours) and the Master of Regional and Urban Planning (Research) at USC. His research explores the concept of Sociotechnical Urbanism and the application of Ergonomics and Human Factors methods to the perennial problems of Land Use Planning and Urban Design. Nicholas has also published widely in the areas of airport and regional land use development, examining the concepts of the Airport City and Aerotropolis. In 2015 Dr Stevens was awarded an Australian Government Citation for Teaching Excellence for his development of design studio based curricula. He currently serves on the Planning Institute of Australia organising committee as well as the Urban Design Advisory Panel for the Sunshine Coast, Queensland, Australia.

Paul Salmon, PhD, is a Professor in human factors and is the creator and director of the Centre for Human Factors and Sociotechnical Systems at University of the Sunshine Coast. He currently holds an Australian Research Council Future Fellowship in the area of transportation safety and leads major research programs in the areas of road and rail safety, cybersecurity, and led outdoor recreation. His current research interests include accident prediction and analysis, distributed cognition, systems thinking in transportation safety and healthcare, and human factors in elite sports and cybersecurity. Paul has co-authored 11 books, over 150 journal articles, and numerous conference articles and book chapters. He has received various accolades for his contributions to research and practice, including the UK Ergonomics Society’s President’s Medal, the Royal Aeronautical Society’s Hodgson Prize for best research and paper, and the University of the Sunshine Coast’s Vice Chancellor and President’s Medal for Research Excellence. In 2016, Paul was awarded the Australian Human Factors and Ergonomics Society Cumming Memorial Medal for his research contribution.

Neville Stanton, PhD, DSc, is a Chartered Psychologist, Chartered Ergonomist and Chartered Engineer. He holds the Chair in human factors engineering in the Faculty of Engineering and the Environment at the University of Southampton. He has degrees in occupational psychology, applied psychology and human factors engineering. His research interests include modelling, predicting, analysing and evaluating human performance in systems as well as designing the interfaces and interaction between humans and technology. Professor Stanton has worked on design of automobiles, aircraft, ships and control rooms over the past 30 years, on a variety of automation projects. He has published 40 books and over 300 journal papers on ergonomics and human factors. His work has been recognised through numerous awards including the Hodgson Prize, awarded to him and his colleagues in 2006 by the Royal Aeronautical Society for research on design-induced, flight-deck, error. He has also received numerous awards from the Institute of Ergonomics and Human Factors in the UK and in 2014 the University of Southampton awarded him a Doctor of Science for his sustained contribution to the development and validation of human factors methods.

Dr Guy Walker is an Associate Professor within the Institute for Infrastructure and Environment at Heriot-Watt University in Edinburgh. He lectures on transportation engineering and human factors and is the author/co-author of over one hundred peer reviewed journal articles and thirteen books. He has been awarded the Institute for Ergonomics and Human Factors (IEHF) President’s Medal for the practical application of Ergonomics theory and Heriot-Watt’s Graduate’s Prize for inspirational teaching. Dr Walker has a BSc Honours degree in Psychology from the University of Southampton, a PhD in Human Factors from Brunel University, is a Fellow of the Higher Education Academy and a member of the Royal Society of Edinburgh’s Young Academy of Scotland. His novel multidisciplinary research has featured in the popular media, from national newspapers, TV and radio through to an appearance on the Discovery Channel.