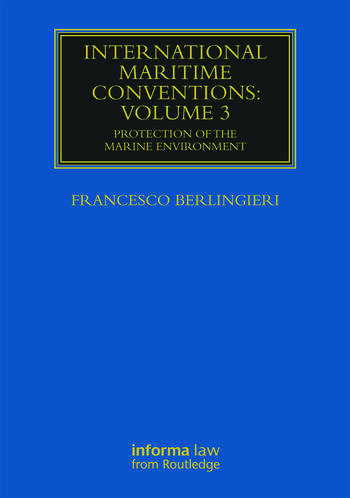 For the first time, this unique text brings together all private international maritime law conventions alongside expert commentary and analysis. Truly global in approach, the book covers each of the nineteen conventions currently in force, all scrutinised by this internationally-acclaimed author. It also examines important maritime conventions not yet fully ratified, including the topical Rotterdam Rules.

This comprehensive resource provides a thorough treatment of both wet and dry shipping treaties, combining breadth of coverage with depth of analysis. In this third volume, the author covers the key conventions dealing with pollution and safety at sea. In particular, the author covers the following instruments:

This book is an indispensable reference for maritime lawyers, academics and students of maritime law worldwide.

Francesco himself has been involved in drafting the 1969 Civil Liability Convention and the creation of the 1993 Maritime liens and mortgages Convention and of the 1999 Arrest Convention. Francesco has taught maritime law at various institutions in Italy and abroad. He was President of the Comité Maritime International (CMI) and presently holds an ad honorem President status. In addition, he is the Editor of the CMI Publications, Editor of Il Diritto Marittimo (a quarterly maritime law review, published in Genoa, Italy), the correspondent in Italy for Lloyd's Maritime and Commercial Law Quarterly, and the author of many books and articles in Italian, English and French.