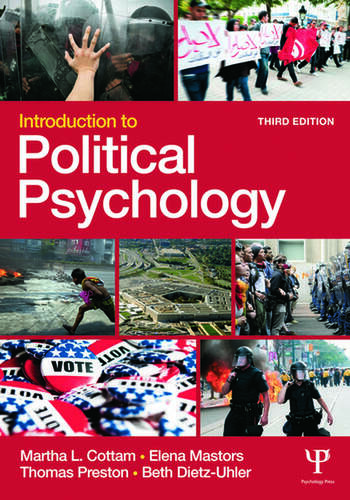 This comprehensive, user-friendly introductory textbook to political psychology explores the psychological origins of political behavior. The authors introduce readers to a broad range of theories, concepts, and case studies of political activity to illustrate that behavior. The book examines many patterns of political behaviors, including leadership, group behavior, voting, media effects, race, ethnicity, nationalism, social movements, terrorism, war, and genocide. It explores some of the most horrific things people do to each other, as well as how to prevent and resolve conflict – and how to recover from it.

The book contains numerous features to enhance understanding, including text boxes highlighting current and historical events to help students see the connection between the world around them and the concepts they are learning. Different research methodologies used in the discipline are employed, such as experimentation and content analysis. The third edition of the book has two new chapters, one on the media, and one on social movements.

This accessible and engaging introductory textbook is suitable as a primary text on a range of upper-level courses in political psychology, political behavior, and related fields, including policymaking.

Martha L. Cottam is a Professor of Political Science in the School of Politics, Philosophy, and Public Affairs at Washington state University. She specializes in political psychology, international politics, and intercommunal conflict. She has published books and articles on US foreign policy, decision making, nationalism, and Latin American politics. She received her Ph.D. from UCLA.

Elena Mastors is currently Vice President and Dean of Applied Research at the American Public University System.  Previous to her work with APUS, she was an Associate Professor in the National Decision Making Department of the Naval War College, and also held various senior intelligence and policy positions in the Office of Undersecretary of Defense for Intelligence and the Defense Intelligence Agency. She has published numerous books, articles and papers on the subject of the political psychology of conflict and armed group. She received her Ph.D. from Washington State University.

Thomas Preston is a Professor of Political Science in the School of Politics, Philosophy, and Public Affairs at Washington State University. He specializes in political psychology, leadership analysis, and international politics. He has written numerous books and articles on presidential leadership, weapons of mass destruction, and American foreign policy. He received his Ph.D. from The Ohio State University.

Beth Dietz is Professor of Psychology at Miami University. Her research interests include social identity theory, computer-mediated communication, and the scholarship of teaching and learning..She teaches a variety of courses in psychology, including introductory psychology, social psychology, research design and analysis, and a graduate teaching practicum..She has strong interests in teaching online and using technology to enhance student learning. She received her Ph.D. in social psychology from the University of Pittsburgh.

"Political Psychology addresses the nexus between politics and psychology- what leads leaders to lead, followers to follow? How can ordinary people perpetrate extraordinary evil? In Introduction to Political Psychology, 3rd ed. the authors deftly clarify a wide range of vexing problems, from leader personality to man’s inhumanity to man. An admirable introduction to the interdiscipline of political psychology."
—Jerrold M. Post, M.D., Director of Political Psychology at The George Washington University and author of Leaders and their Followers in a Dangerous World

"A tour de force introduction to the field of political psychology as viewed through the lens of both the mass public and political elites. The book demonstrates the relevance of individuals and groups to the understanding of how politics works."

"The authors of this volume have done an outstanding job of producing a comprehensive, clearly written, accessible and up-to-date textbook in political psychology. This book is a ‘must read’ for those wishing to get a firm grasp of this dynamic field and expanding field."