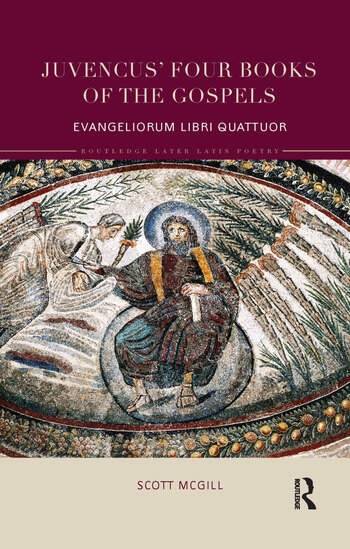 Juvencus’ Evangeliorum libri IV, or "The Four Books of the Gospels," is a verse rendering of the gospel narrative written ca. 330 CE. Consisting of around 3200 hexameter lines, it is the first of the Latin "Biblical epics" to appear in antiquity, and the first classicizing, hexameter poem on a Christian topic to appear in the western tradition. As such, it is an important text in literary and cultural history.

This is the first English translation of the entire poem. The lack of a full English translation has kept many scholars and students, particularly those outside of Classics, and many educated general readers from discovering it. With a thorough introduction to aid in the interpretation and appreciation of the text this clear and accessible English translation will enable a clearer understanding of the importance of Juvencus’ work to later Latin poetry and to the early Church.

Preface and Book One

Notes to Book One

Scott McGill is professor of Classics at Rice University in Houston, Texas. He is the author of Virgil Recomposed: The Mythological and Secular Centos in Antiquity (Oxford, 2005) and Plagiarism in Latin Literature (Cambridge, 2012). He is also a co-editor of From the Tetrarchs to the Theodosians: Later Roman History and Culture, 284-450 CE (Cambridge, 2010) and Classics Renewed: Reception and Innovation in the Latin Poetry of Late Antiquity (Winter, 2016).

"As inventor of the genre of biblical epic, Juvencus is historically significant; his poetic style is less ground-breaking. But now, he has been graced with an elegant, thoughtful translation into iambic pentameters by Scott McGill. Moreover, McGill's scholarly commentary makes clear Juvencus' many debts to his Latin predecessors. This is one of the rare occasions on which one might prefer reading the translation instead of the the original."

"The current volume will find its natural venue to be the university classroom. Juvencus’ poem would fit in an expanding Classics curriculum, whether in a class on the epic tradition after Virgil, one exploring the interplay of religious and cultural identities in the Roman empire, perhaps even as the object of a primary source study in a survey course on Late Antiquity ... This will be the standard English translation, so we should be glad that McGill has produced a text not just readable but pleasing and artful. Juvencus is no landmark of world literature, as the author himself admits, but this volume will allow it to illustrate for a broader audience an important moment in the development of Christianity and the history of Latin literature."

"... [an] excellent new translation ... wonderful effect ... The translation is preceded by a substantial introduction that does an excellent job of setting up the poem and its author, about whom we know extremely little. McGill usefully situates [the poem] within the classical genre of epic, but also discusses the significant ways in which the author's Christian fairth impinges upon his handling of the genre ... In sum, Juvencus' first appearnace in English in excellent and will benefit newcomers and veterans of late Latin poetry alike."

"Scott McGill provides his readers with the first complete English translation of Juvencus's 4th-century poem, Evangeliorum Libri Quattuor (ELQ). ... While ELQ has been neglected by most scholars of early Christianity and late antiquity in the early modern and modern periods, McGill urges us to take this text seriously as a prominent example of early Christian poetry and hermeneutics, given its usage as a school text in the middle ages and Renaissance (26)."