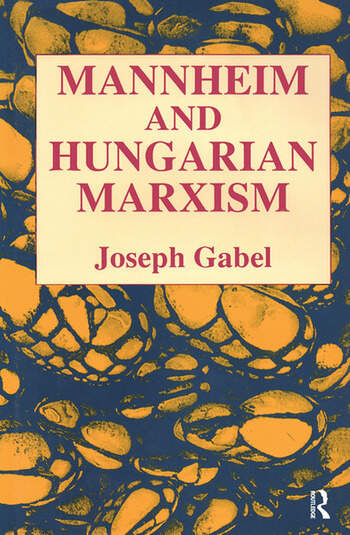 This remarkable work situates the great Karl Mannheim not only in the Austro-Hungarian empire, but in Hungary and especially in the intellectual fever pitch of pre-war Budapest, with its plethora of revisionist Marxists, anarchists, and intellectuals from a variety of areas who brought radical ideas into the mainstream of biological and social sciences. As Gabel reminds us, Budapest provided a special environment in which the cross-currents of Europe met, and was uniquely devoid of the xenophobia and militarism of so many other parts of Europe.

The volume serves as a useful introduction to the force and character of Marxism in Central Europe. Gabel covers not only key figures but major concepts associated with Mannheim and the sociology of knowledge: ideology and false consciousness; the socially unattached intelligentsia; and the utopian conscience. In addition, we are given a tour of the work of Mannheim as seen in Germany, France and England. Gabel's has a unique mastery of the major languages of Europe, and this gives him the potential for a reinterpretation of Mannheim that reveals the author to be a talented thinker in his own right, and not simply a chronicler of the work of others. His final chapter on Mannheim, comparing him with Lukacs as well as Marx, is central to our understanding of sociology.

In raising the importance of the role of consciousness in the study of society, Mannheim overcame what Marx and Engels, no less than many of his followers understood to be an essential weakness in the so-called economic interpretation of history. This book, linking Mannheim to the Hungarian climate, helps us appreciate how this sociological synthesis came about in a specific social setting.

Joseph Gabel was born in Hungary, and educated in French universities. He is the author of False Consciousness (1962); Sociology of Alienation (1970); Ideologies, Vol. I (1974); Ideologies II (1978), all in French. His book on The Forms of Estrangement (1964) was published in German. His shorter articles have appeared in Kolner Zeitschrift for Soziologie und Sozial-psychologie, and the Newsletter of the International Society for the Sociology of Knowledge.