Lives of Muslims in India
Politics, Exclusion and Violence 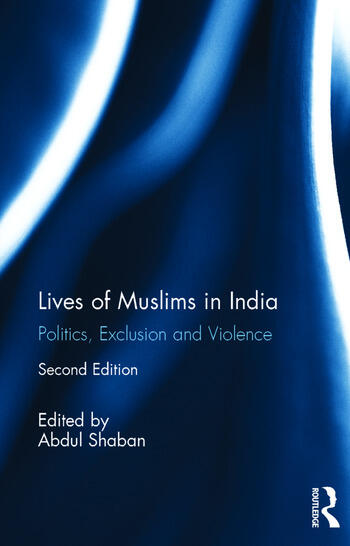 Lives of Muslims in India: Politics, Exclusion and Violence

The fast-consolidating identities along religious and ethnic lines in recent years have considerably ‘minoritised’ Muslims in India. The wide-ranging essays in this volume focus on the intensified exclusionary practices against Indian Muslims, highlighting how, amidst a politics of violence, confusing policy frameworks on caste and class lines, and institutionalised riot systems, the community has also suffered from the lack of leadership from within. At the same time, Indian Muslims have emerged as a ‘mass’ around which the politics of ‘vote bank’, ‘appeasement’, ‘foreigners’, ‘Pakistanis within the country’, and so on are innovated and played upon, making them further apprehensive about asserting their legitimate right to development. The important issues of the double marginalisation of Muslim women and attempts to reform the Muslim Personal Law by some civil society groups is also discussed. Contributed by academics, activists and journalists, the articles discuss issues of integration, exclusion and violence, and attempt to understand categories such as ‘identity’, ‘minority’, ‘multiculturalism’ and ‘nationalism’ with regard to and in the context of Indian Muslims.

This second edition, with a new introduction, will be of great interest to scholars and researchers in sociology, politics, history, cultural studies, minority studies, Islamic studies, policy studies and development studies, as well as policymakers, civil society activists and those in media and journalism.

Abdul Shaban is Professor at the School of Development Studies and Deputy Director (Tuljapur Campus), Tata Institute of Social Sciences, Mumbai, India. He has published widely on Muslims in India, including in Mumbai: Political Economy of Crime and Space (2010); Muslims in Urban India: Development and Exclusion (2013); and Mega-urbanization in the Global South: Fast Cities and New Urban Utopias of the Postcolonial State (2012, co-editor). He has been member of the Study Group appointed by the Government of Maharashtra to assess the ‘Social, Economic and Educational Status of Muslims in Maharashtra’ (2012–13); the ‘Post-Sachar Evaluation Committee’ (2013–14) appointed by the Ministry of Minority Affairs, Government of India; and the Commission of Inquiry on Social, Economic and Educational Status of Muslims in Telangana (2015–present). He has also authored many reports for the Maharashtra State Minorities Commission, the Government of Maharashtra, the Government of India, the World Bank, and national and international corporate groups.

‘Lives of Muslims in India is an important book not only because it adds to the literature on Indian Muslims but also because it confronts head on many of the issues facing Indian Muslims. The immense importance of the Sachar report in this context also becomes evident.’

‘It offers significantly new things to the readers. One hopes it would be appreciated not only in academic as well as popular circles but also in policy domain and state executive.’

‘This is a stimulating, interesting, thought-provoking and thoroughly absorbing collection that will be of value for academics, students and researchers interested in political sociology, minority studies, Asian politics, cultural and religious studies, anthropology and social sciences. The series of articles that individually represent important contributions to the debate about the lives of Muslims in India and present a series of interesting observations, comparisons, interpretations and questions make it a book worth reading.’

‘This is a rare book bringing together thought provoking, well researched and articulated writings from a range of authors on issues relating to Muslims of India. Essays explore the impact of violence on the structure of exclusion and point to the changing domains of national integration. The analytical richness describing the life situation of Muslims in major cities, regions and at the national level within the multidisciplinary perspective, broaden our understanding of the social and developmental institutions, their formations and processes. Special emphasis on the issues relating to Muslim women are praiseworthy.’