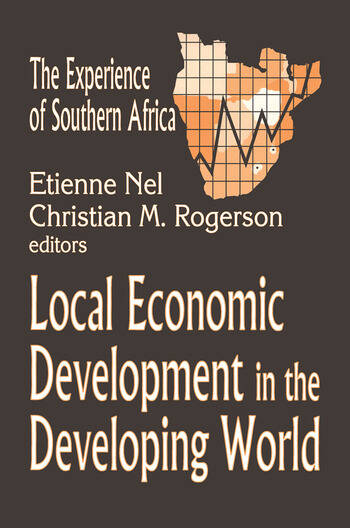 Local Economic Development in the Changing World: The Experience of Southern Africa

Over the last two decades the concept and practice of Local Economic Development (LED) has gained widespread acceptance around the world as a locally-based response to the challenges posed by globalization, devolution, local-level opportunities, and economic crises. Support for local economic development is now firmly on the agenda of many national governments and key international agencies.

This volume examines the debates about Local Economic Development and examines some of the unfolding experiences of LED in the developing world. The focus is upon the region of southern Africa, and more especially upon post-apartheid South Africa. LED emerged in South Africa as one of the more significant post-apartheid development options being pursued by empowered localities with the overt encouragement of national government. Elsewhere in the developing world, much interest surrounds the experience of LED in post-apartheid South Africa, which is seen as a laboratory for experimentation, innovation, and learning. The seventeen chapters in this book examine the range of LED interventions that have been the basis for experimentation in the last decade, including both pro-market as well as pro-poor interventions. Key themes include debates about the most appropriate policy directions for LED, its contribution towards sustainable development, the role of social capital, cluster support, public procurement, eco-development, good governance and tourism-led LED. The book also contains a series of detailed case studies on the implementation of LED in South Africa and the wider region of southern Africa, including analyses of LED undertaken at a variety of scales from the provincial, metropolitan, and small-town level. Until now, most research on local economic development has focused on the developed world.

This volume breaks new ground in applying LED policy and practices to problems specific to the developing world. It will be of interest to scholars of development studies, urban and regional planning, human geography, and urban studies.