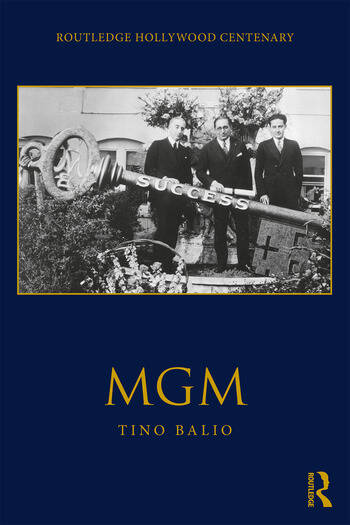 The winner of the 2019 Peter C. Rollins Book Award

This is the first comprehensive history of MGM from its origins in 1905 to the present. Following a straightforward chronology corresponding to specific periods of film industry history, each chapter describes how successive managements adjusted their production strategies and business practices in response to evolving industrial and market conditions.

As the production subsidiary of the Loew’s Inc. theatre chain, MGM spent lavishly on its pictures and injected them with plenty of star power. The practice helped sustain MGM’s preeminent position during the heyday of Hollywood. But MGM was a conservative company and watched as other studios innovated with sound and widescreen, adjusted to television, and welcomed independent producers. By the 1960s, the company, sans its theatre chain, was in decline and was ripe for a takeover. A defining moment occurred in 1969, when Kirk Kerkorian, a Las Vegas entrepreneur, made a successful bid for the company. There followed a tumultuous thirty-six-year period when Kerkorian bought and sold MGM three times. Meanwhile, MGM never regained its former status and has functioned as a second-tier company to this day.

Focusing on MGM’s top talent – such as Louis B. Mayer, Irving Thalberg, David O. Selznick, and Arthur Freed; directors King Vidor and Vincente Minnelli; and stars of the screen Greta Garbo, Judy Garland, Clark Gable, and Mickey Rooney – and award-winning films, this book highlights the studio’s artistic achievements and status within the industry.

Tino Balio is Professor Emeritus of Film in the Department of Communication Arts at the University of Wisconsin–Madison. He is the author of numerous books and articles on the American film industry, most recently, Hollywood in the New Millennium, London: BFI Palgrave, 2013.

"Tino Balio, pioneering researcher into the structure and conduct of the American film business, offers a sweeping, in-depth account of a studio that is known for Hollywood’s most glorious rise and most shameful fall. This book will become a standard reference source on the studio that was for a time the supreme name in movie entertainment."