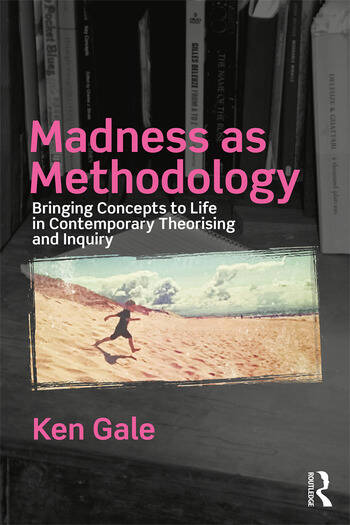 Madness as Methodology: Bringing Concepts to Life in Contemporary Theorising and Inquiry

Madness as Methodology begins with the following quotation from Deleuze and Guattari, ‘Madness need not be all breakdown. It may also be breakthrough.’ This quotation firmly expresses the book’s intention to provide readers with radical and innovative approaches to methodology and research in the arts, humanities and education practices. It conceptualises madness, not as a condition of an individual or particular being, but rather as a process that does things differently in terms of creativity and world making.

Through a posthuman theorising as practice, the book emphasises forms of becoming and differentiation that sees all bodies, human and nonhuman, as acting in constant, fluid, relational play. The book offers a means of breaking through and challenging the constraints and limitations of Positivist approaches to established research practice. Therefore, experimentation, concept making as event and a going off the rails are offered as necessary means of inquiry into worlds that are considered to be always not yet known.

Rather than using a linear chapter structure, the book is constructed around Deleuze and Guattari’s use of an assemblage of plateaus, providing the reader with a freedom of movement via multiple entry and exit points to the text. These plateaus are processually interconnected providing a focal emphasis upon topics apposite to this madness as methodology. Therefore, as well as offering a challenge to the constraining rigours of conventional research practices, these plateaus engage with topics to do with posthuman thinking, relationality, affect theory, collaboration, subjectivity, friendship, performance and the use of writing as a method of inquiry.

Introduction? On Arrival from Elsewhere

Some Stories of Emergence: Routines, Surprises And Epiphanies

Madness as A Collaborative Practice

Friendship, Madness and The Posthuman

Writing Minor Literature: Working with Flows, Intensities and The Welcome of The Unknown

Madness as Methodology as Performance

What Can This Madness as Methodology Do?

Ken Gale works in the Institute of Education in the Faculty of Arts and Humanities at Plymouth University. His main philosophical and academic interests are to do with bringing the use of posthuman, process based forms of concept making as event to creative, experimental practices of pedagogy and research in education.

Treat yourself. Enter Gale’s writing, his becoming, where assertion gives way to the possible. See how the nail rejects the hammer, the thread zigzags away from the seam, the mirror celebrates its shards. Gale’s work is an assemblage of colorful fabrics and ribbons, always flowing, some wildly, some modestly, all caught in an always swirling wind. Embrace the pleasures of becoming with Gale, of moving with him and into your own terrain. His joyful methodological madness invites a performative immediacy of the moment, of movement. At the end, you may feel as I do: What pleasure surrendering to the space Gale opens!

Advocating madness as methodology is a tricky business: get it wrong, and you risk seeming either ‘just’ mad, or not really mad enough. Ken Gale gets it right. The book wears its erudition, its range, and its deep thoughtfulness lightly. It exemplifies exactly what it advocates – unruly resources for creative, ethical and experimental research encounters.

Madness in this book does not rest in a binary opposition to sanity; in the emergent, playful experimentation and poetry of this text, the thrust is not so much toward breakdown, but breakthrough. Gale confronts chaos, not as something to be conquered, but as a means to enhancing thought by removing it from the relentless repetitions of representation, classification and identification. In breaking loose from those old forms of humanist inquiry, the book opens out as a sparkling, embodied, sensory and unpredictable set of experiments, bringing to life the entanglements of language, of human and non-human bodies, and of desire.