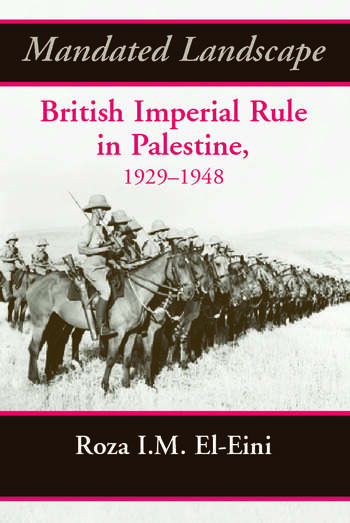 In this ground-breaking authoritative study, a highly documented and incisive analysis is made of the galvanising changes wrought to the people and landscape of British Mandated Palestine (1929-1948). Using a comprehensive and interdisciplinary approach, the book’s award-winning author examines how the British imposed their rule, dominated by the clashing dualities of their Mandate obligations towards the Arabs and the Jews, and their own interests. The rulers’ Empire-wide conceptions of the ‘White man’s burden’ and preconceptions of the Holy Land were potent forces of change, influencing their policies.

Lucidly written, Mandated Landscape is also a rich source of information supported by numerous maps, tables and illustrations, and has 66 appendices, a considerable bibliography and extensive index. With a theoretical and historical backdrop, the ramifications of British rule are highlighted in their impact on town planning, agriculture, forestry, land, the partition plans and a case study, presenting discussions on such issues as development, ecological shock, law and the controversial division of village lands, as the British operated in a politically turbulent climate, often within their own administration.

This book is a major contribution to research on British Palestine and will interest those in Middle East, history, geography, development and colonial/postcolonial studies.

Roza El-Eini was an undergraduate at University College and the School of Oriental and African Studies, London University, gaining a B.Sc. (Hons); and has an M.Litt. from the Faculty of Modern History, Middle East Centre, St Anthony's College, Oxford University; and a PhD. from the Hebrew University of Jerusalem. Her PhD. was awarded First Prize in a National competition in Israel for the year 2000 by the Dr Aharon and Advocate Josef Ben-Shamesh Fund. Dr El-Eini is a Fellow of the Royal Historical Society.

'In this award-wining author’s ground-breaking study, an incisive, highly documented analysis is made of the galvanising changes wrought to Mandate Palestine by the British rule in town planning, agriculture, forestry land, the partition plans and a case study.' - Asian Affairs, Nov 2006

'This book is a major contribution to research on British Palestine and will interest  those in Middle East, history, geography, development and colonial/postcolonial studies.' - Asian Affairs, Nov 2006