Martial Arts and the Body Politic in Meiji Japan 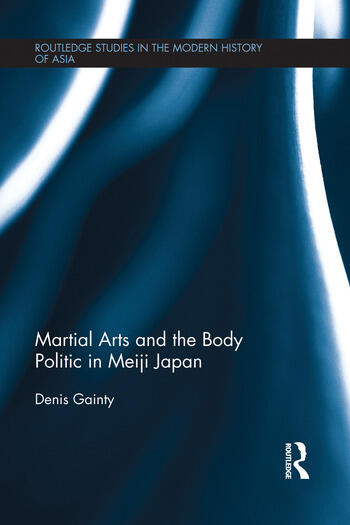 Martial Arts and the Body Politic in Meiji Japan

In 1895, the newly formed Greater Japan Martial Virtue Association (Dainippon Butokukai) held its first annual Martial Virtue Festival (butokusai) in the ancient capital of Kyoto. The Festival marked the arrival of a new iteration of modern Japan, as the Butokukai’s efforts to define and popularise Japanese martial arts became an important medium through which the bodies of millions of Japanese citizens would experience, draw on, and even shape the Japanese nation and state.

This book shows how the notion and practice of Japanese martial arts in the late Meiji period brought Japanese bodies, Japanese nationalisms, and the Japanese state into sustained contact and dynamic engagement with one another. Using a range of disciplinary approaches, Denis Gainty shows how the metaphor of a national body and the cultural and historical meanings of martial arts were celebrated and appropriated by modern Japanese at all levels of society, allowing them to participate powerfully in shaping the modern Japanese nation and state. While recent works have cast modern Japanese and their bodies as subject to state domination and elite control, this book argues that having a body – being a body, and through that body experiencing and shaping social, political, and even cosmic realities – is an important and underexamined aspect of the late Meiji period.

Martial Arts and the Body Politic in Meiji Japan is an important contribution to debates in Japanese and Asian social sciences, theories of the body and its role in modern historiography, and related questions of power and agency by suggesting a new and dramatic role for human bodies in the shaping of modern states and societies. As such, it will be valuable to students and scholars of Japanese studies, Japanese history, modern nations and nationalisms, and sport and leisure studies, as well as those interested in the body more broadly.

1. Introduction 2. The Context for the Butokukai: The Development of Martial Arts and the Samurai as Cultural Forms in Tokugawa and Early Meiji 3. The Dainippon Butokukai: Its Founding, Growth, and Dissolution 4. Capture the Flag: Spectacle and Rhetoric 5. Talking Teaching: The Rhetoric of Martial Arts in Physical Education 6. Giving the State its Legs: Rethinking Agency and the Body through the Butokukai 7. Conclusion 8. Index, Cherie Braden

Denis Gainty is an Assistant Professor in the Department of History at Georgia State University, USA.