Media Independence
Working with Freedom or Working for Free? 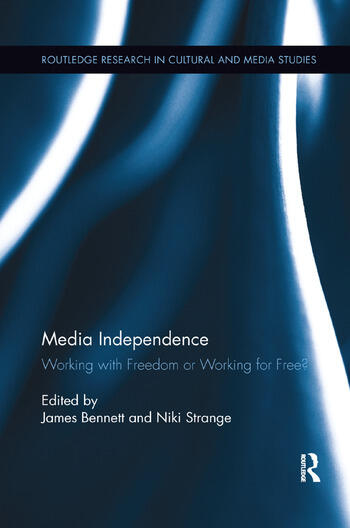 Media Independence: Working with Freedom or Working for Free?

Media independence is central to the organization, make-up, working practices and output of media systems across the globe. Often stemming from western notions of individual and political freedoms, independence has informed the development of media across a range of platforms: from the freedom of the press as the "fourth estate" and the rise of Hollywood’s Independent studios and Independent television in Britain, through to the importance of "Indy" labels in music and gaming and the increasing importance of independence of voice in citizen journalism. Media independence for many, therefore, has come to mean working with freedom: from state control or interference, from monopoly, from market forces, as well as freedom to report, comment, create and document without fear of persecution. However, far from a stable concept that informs all media systems, the notion of media independence has long been contested, forming a crucial tension point in the regulation, shape, size and role of the media around the globe.

Contributors including David Hesmondhalgh, Gholam Khiabany, José van Dijck, Hector Postigo, Anthony Fung, Stuart Allan and Geoff King demonstrate how the notion of independence has remained paramount, but contested, in ideals of what the media is for, how it should be regulated, what it should produce and what working within it should be like. They address questions of economics, labor relations, production cultures, ideologies and social functions.

Introduction: The Utopia of Independent Media: Independence, Working with Freedom and Working for Free James Bennett  Section I: Indies, Independents and Independence  1. Guarding the Guardians: The Leveson Inquiry and the Future of Independent Journalism Stephen Jukes and Stuart Allan  2. Differences of Kind and Degree: Articulations of Independence in American Cinema Geoff King  3. From Independence to Independents, Public Service to Profit: British TV and the Impossibility of Independence James Bennett  4. Popular Music, Independence and the Concept of the Alternative in Contemporary Capitalism David Hesmondhalgh and Leslie M. Meier  5. A Vision of and for the Networked World: John Perry Barlow's Declaration of the Independence of Cyberspace at Twenty Daniel Kreiss  Section II: Working with Freedom or Working for Free  6. A Moral Economy of Independent Work? Creative Freedom and Public Service in UK Digital Agencies James Bennett, Niki Strange and Andrea Medrado  7. Indie TV: Innovation in Series Development Aymar Jean Christian  8. Social Media and Journalistic Independence Thomas Poell and José van Dijck  9. Playing for Work: Independence as Promise in Gameplay Commentary on YouTube Hector Postigo  Section III: Independence in a Cold Political Climate  10. From Perestroika to Putin: Journalism in Russia James Rodgers  11. Independence within the Boundaries: State Control and Strategies of Chinese Television for Freedom Anthony Fung, Xiaoxiao Zhang and Luzhou Li  12. Uneven and Combined Independence of Social Media in the Middle East: Technology, Symbolic Production and Unproductive Labor Gholam Khiabany

James Bennett is Head of the Media Arts Department and Reader in Television & Digital Culture at Royal Holloway, University of London, UK.

Niki Strange is Research Fellow at University of Sussex, UK and runs her own digital media consultancy, Strange Digital, where she provides research, business development and strategy consulting for creative businesses and organizations.

"Bennett and Strange have assembled an original, wide-ranging interrogation of 'independence' as it is mobilized across media industries and national contexts. Together, the essays in this book breathe new life into this often-abused and misused term, making an impassioned case for protecting true independent vision and values in our media culture." - Jennifer Holt, Associate Professor of Film and Media Studies, University of California, Santa Barbara, USA

"Bennett and Strange’s collection impressively maps the varied sociopolitical, aesthetic, industrial and rhetorical meanings of 'media independence' even as it grounds the concept in rich case studies covering film, television, gaming, music, the Internet and more. Media Independence is an invaluable resource for thinking through the complex dynamics of creativity, work and industry across a range of contemporary national contexts. A must read." - Alisa Perren, Associate Professor in the Department of Radio-TV-Film, University of Texas at Austin, USA