Military, State, and Society in Israel
Theoretical and Comparative Perspectives 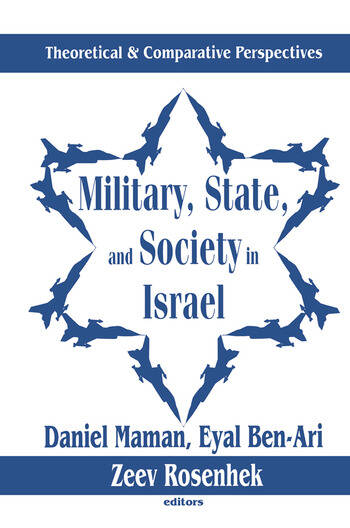 Military, State, and Society in Israel: Theoretical and Comparative Perspectives

There have been many books on the place of war, security, or military service in Israeli society. The Military, State, and Society in Israel makes contributions to the debate-theoretical, empirical, and polemical-that are related to the Israeli case and to wider debates about the place of war and the military in contemporary industrialized societies. The Israeli case is important in the development of more macro approaches to the study of "things military" as war has played a central role in Israel's history and continues to do so. The book encapsulates in a very explicit manner tensions in the relationships between the military, state, and society and stands at the core of contemporary debates between two fundamental approaches to the study of the relations between the military society and the state: the "armed forces and society" school and the "state-making and war" perspective.Contemporary Israel is the site of debates about many of the fundamental assumptions that have undergirded the Jewish nation-state: the ethnic character of nationhood and statehood; the role of the Jewish diaspora vis-Ó-vis Israel; the legitimacy of Jewish "ethnic pluralism"; the meaning of the Holocaust; privatization of social life and the spread of consumerism; and weakening of the centralized state as the agent of social transformation affecting housing, language, health, technology, production, dress, and child-rearing. One important consequence of these internal conflicts and struggles has been a significant erosion in the almost sacred status once enjoyed by state institutions, and especially the military, among the majority of Jewish population."Theoretical and Comparative Perspectives," situates Israel in its wider theoretical and comparative context and shows how the study of Israel contributes to the theoretical understanding of contemporary changes in civil-military relations. "The Politics of Civil-Military Relations," concentrates on current changes in Israeli politics, the character of the conflict with the Palestinians, and the place of military in society. "The State and War-Making-Creating Citizens, Soldiers, and Men and Women," indicates how war and the military are not only instruments for state-making, but are also important factors in the formation of individual identities. "The Notion of 'National Security'-Institutions and Concepts," raises the basic question of whether the institutional mechanisms and the strategic conceptions crystallized during the first 50 years of Israel's existence are still relevant in a changing post-cold war world. "The Armed Forces as Organization, Continuity and Change," focuses on the lines of continuity and trends of change in several aspects of the Israeli Defense Forces' internal organizational structure.Studies based on Israeli cases, data, and scholarship have been central to the development of expertise in such fields as applied psychology and psychotherapy. This volume contributes to these areas of study, and will be of central importance to professionals interested in civil-military.