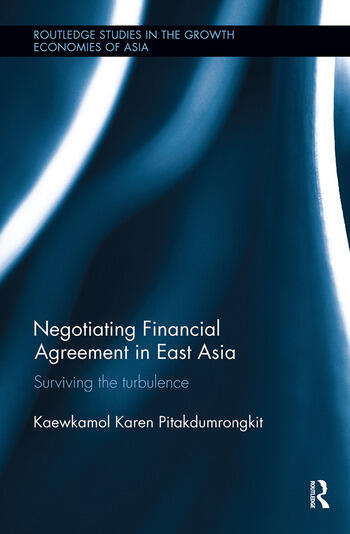 Every international negotiation bears a risk of collapse, as even among like-minded countries, different players often have different priorities and interests. This can result in conflict as states clash over certain agreement details, and their disputes can escalate and founder the entire negotiation, missing an opportunity to realize potential initiatives. However, other circumstances have witnessed the cases of successful deals. This begets a puzzle: What did these states do to salvage their talks and seal their deals?

This book examines East Asian financial negotiation processes and seeks to explain why some negotiations are successful despite the risk of bargaining failure. Using the Chiang Mai Initiative Multilateralization (CMIM) talks as the case study, the book analyses how states with little prior experience at dealing with certain aspects of an agreement manage to avert negotiation failure and successfully conclude their final deal. Using extensive archival research, in-depth interviews with involved negotiators and experts, and process-tracing method, it reconstructs the making of the CMIM agreement. The multi-country analysis reveals the roles played by key actors, namely China, Japan, South Korea, Indonesia, Malaysia, and Thailand, in shaping the agreement terms. The book goes on to argue that preventing a stalemate or succeeding in concluding arrangements like the CMIM is a product of various strategies and tactics employed by negotiators. These include employing bargaining strategies and tactics that help avoid a negotiation deadlock, and assessing the conditions under which such strategies and tactics are likely - or unlikely - to achieve the objective of avoiding bargaining failure.