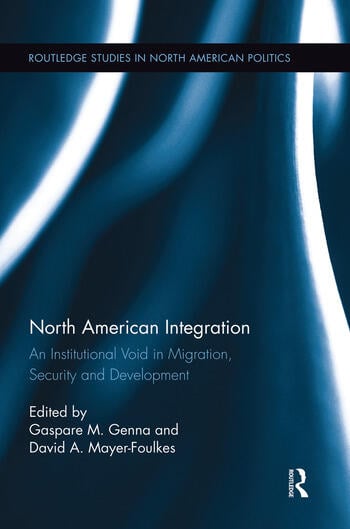 The course of events since the implementation of NAFTA has had unexpected elements with significant impacts on North American integration. First has been the rise of China as a larger source of imports and production partner than Mexico. Second has been the rise of security concerns since September 11, 2001. The result has been much stronger integration between Canada and the US than with Mexico. Migration issues are now linked with security, which has risen to a top priority in the international agenda. While liberalization has furnished strong economic incentives for integration, it has not provided a sufficient guide for the political process, which requires leadership and appropriate institutions to coordinate and regulate the special interest groups. A coherent and effective North American integration would be a valuable asset in the context of global integration and competition, yet the issues involved are quite complex and varied.

examines the current state of North American integration. Editors Gaspare M. Genna and David A. Mayer-Foulkes gather an international group of experts to give a broad, coherent picture of the current, multifaceted process of integration, and find that institutional development is an essential component.  Divided into three sections, the book:

- Discuss the determinants of integration and shows that the institutional characteristics of the three countries, including democracy and basic rights, are the most important.

- Provides examples of institutional building in contexts for which institutions are lacking, specifically labor, migration and health issues.

- Examines issues such as overall security arrangements, trade, drug related violence, energy, and the continuing wage gap among the countries, which have an important bearing on integration.

David Mayer-Foulkes has conducted research for CIDE, Mexico, for many years as well as PAHO, UNDP World Bank, and the Mexican Commission on Macroeconomics and Health, amongst others. His main interest is economic development, including the role of long-term intergenerational health, nutrition and educational poverty traps, and of multiple steady state models of endogenous technological change.

"North American Integration makes a compelling point: the growing interaction between Canada, Mexico, and the United States has been beneficial to all three countries, but it is now endangered by an "institutional void." This book is a clarion call to build continental institutions to manage the policy intersection of migration, security, and development and forge a more equitable, secure and prosperous North America.

—Robert A. Pastor, American University, author of The North American Idea: A Vision of a Continental Future

"In this important and timely collection, Gaspare Genna, David Mayer-Foulkes and a dozen leading Canadian, Mexican, and US scholars take stock of two decades of NAFTA. The chapters pose critical questions about the present and future of North America, exposing in new ways NAFTA’s grave institutional and governance flaws. Contributors expertly examine the crucial dimensions of North American integration, from security and border controls to undocumented migration and guest-worker programs. More deeply, they unpack the vexed themes of citizenship and democracy at national and regional levels. This is a must read for experts, practitioners and citizens of NAFTA´s North America."

"North American Intergration: An Institutional Void in Migration, Security and Development is a book of thought-provoking essays that spurs the reader to consider the many complexities of interconnected problems faced in North America and both the obstacles to and the necessity of addressing these complexities through effective regional institutions. The book provides a baseline for considering how to build such institutions over the next two decades."