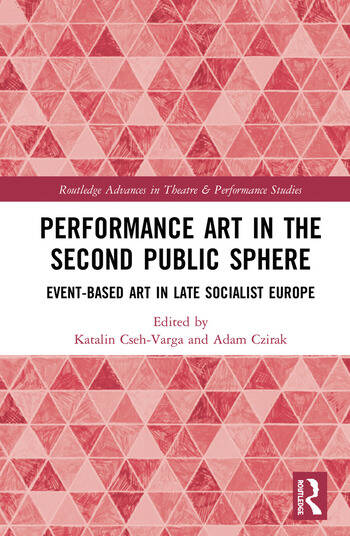 Performance Art in the Second Public Sphere is the first interdisciplinary analysis of performance art in East, Central and Southeast Europe under socialist rule. By investigating the specifics of event-based art forms in these regions, each chapter explores the particular, critical roles that this work assumed under censorial circumstances.

The artistic networks of Yugoslavia, Hungary, Latvia, Lithuania, Poland, Romania, East Germany and Czechoslovakia are discussed with a particular focus on the discourses that shaped artistic practice at the time, drawing on the methods of Performance Studies and Media Studies as well as more familiar reference points from art history and area studies.

Geopolitics and Transnationalism of Art Production

01 Beyond "East" and "West" through "The Eternal Network": Networked Artists’ Communities as Counter-publics of Cold War Europe

02 Tactical Networking: The Yugoslav Performing and Visual Arts between East and West

03 Connection with the World: Internationalism and New Art Practice in Yugoslavia

04 Questioning the East: Artistic Practices and Social Context on the Edge

05 Basements, Attics, Streets and Courtyards: The Reinvention of Marginal Art Spaces in Romania during Socialism

06 Performing the Proletarian Public Sphere: Gender and Labour in the Art of Tomislav Gotovac

07 Outside by Being Inside: Unofficial Artistic Strategies in the Former Czechoslovakia in the 1970s and 1980s

08 From a Local to a National to a Transnational Public Sphere: The Emergence of Solidarity in Poland from a Theatrical Perspective

11 Escape into the Nature! The Politics of Melancholy in Czechoslovakian Performance Art

Facets of Gender in the Second Public Sphere

13 Decision as Art: Performance in the Balkans

14 Communities of Practice: Performing Women in the Second Public Sphere

15 Artistic Collaborations of Performing Women in the GDR

Katalin Cseh-Varga is lecturer at the Universität Wien and a postdoctoral fellow at the Ludwig-Maximilians-Universität, Germany. Her research focuses on the theory of public spheres in the former Eastern bloc, archival theory, and performative and medial spaces of the experimental art scene of the 1960s-80s.

is Assistant Professor in Performance Studies at the Freie University Berlin, Germany. His research focuses on aesthetics of contemporary theatre, visual culture, and performance art in Eastern Europe. His publications include: Partizipation der Blicke (Bielefeld 2011); Melancholy and Politics (co-ed., Athens 2013).