Policing Twentieth Century Ireland
A History of An Garda Síochána 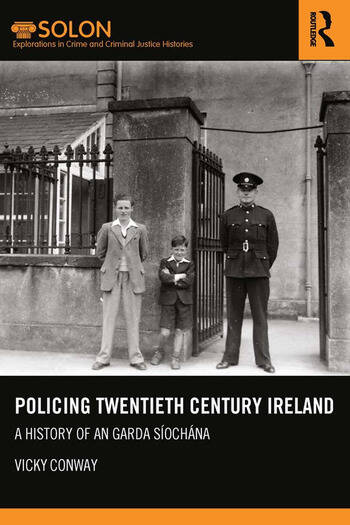 Policing Twentieth Century Ireland: A History of An Garda Síochána

The twentieth century was a time of rapid social change in Ireland: from colonial rule to independence, civil war and later the Troubles; from poverty to globalisation and the Celtic Tiger; and from the rise to the fall of the Catholic Church. Policing in Ireland has been shaped by all of these changes. This book critically evaluates the creation of the new police force, an Garda Síochána, in the 1920s and analyses how this institution was influenced by and responded to these substantial changes.

Beginning with an overview of policing in pre-independence Ireland, this book chronologically charts the history of policing in Ireland. It presents data from oral history interviews with retired gardaí who served between the 1950s and 1990s, giving unique insight into the experience of policing Ireland, the first study of its kind in Ireland. Particular attention is paid to the difficulties of transition, the early encounters with the IRA, the policing of the Blueshirts, the world wars, gangs in Dublin and the growth of drugs and crime. Particularly noteworthy is the analysis of policing the Troubles and the immense difficulties that generated.

This book is essential reading for those interested in policing or Irish history, but is equally important for those concerned with the legacy of colonialism and transition.

1. Colonialism and politicised policing,  2. An Garda Siochana: An ill-concieved birth,  3. The 1930s and 40s: Transition and political policing,  4. The 1950s and 60s: a policeman's paradise?,  5. The Troubles and policing Ireland,  6. The special branch and the Troubles,  7. The end of the century: policing change,  8. The twenty-first century: scandal, austerity, reform and managerialism.

"This is an interesting book on the police force of the Republic of Ireland, An Garda Síochána, and forms a valuable contribution to our knowledge of policing within the British Isles. Conway traces the development of the Garda from independence in the early 1920s through the Troubles and to adjusting to a rapidly changing society in recent decades while facing several scandals. It is an engaging analysis of an under-researched force which emerged from British colonial policing and uniquely served as a pillar of reconstruction in post-independence Irish society."

"Policing Twentieth Century Ireland is a must-read for scholars of Irish policing and of policing scholars more generally. Policing in Ireland has left its fingerprints on policing practices across the globe and this authoritative and well-written book sheds new light on a history of policing so intermeshed with the nature and development of the state, conflict and social change. It is a welcome addition for criminologists, sociologists, lawyers and historians."

"In this book Dr Vicky Conway paints a rich and valuable picture of policing in Ireland over the last 100 years. It is highly readable, well informed and thoughtful, and will be invaluable to anyone interested in Irish policing or curious about criminal law enforcement in states that have undergone a transition from colonial to independent rule. It throws wonderful light in particular on the colonial and post-colonial determinants that have shaped – and continue to shape – the governance and legitimacy of policing in Ireland. Employing post-colonial theory as one tool of analysis, Conway provides an insight not ordinarily captured in conventional Anglo-American policing histories. She seamlessly weaves the personal accounts of 42 retired members of the Irish police force with more academic analyses, ensuring a rich and nuanced commentary. Combining the personal with the scholarly, and the historical with the conceptual, this book is both original and compelling."

"This is a most timely publication and addresses an area within policing history that is not widely appreciated or understood... A lot of ground is covered in this book to which a short summary cannot do justice... A good, interesting read..."