Psychological War Trauma and Society
Like a hidden wound 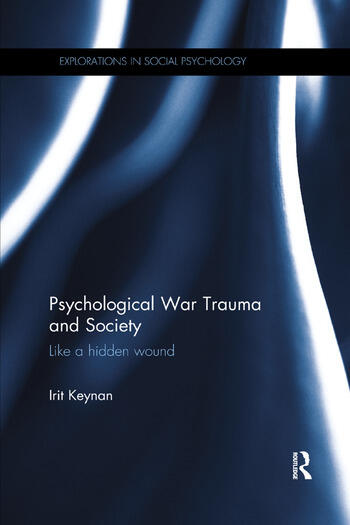 Psychological War Trauma and Society: Like a hidden wound

This book explores the psychological trauma affecting soldiers and civilians who have encountered the violence of war or terrorism, arguing that the enigmas surrounding war trauma are rooted in culture, collective memory and social norms. Focusing primarily on a large-scale sociological study in Israel, chapters detail the ideological, political, historical and economic factors that shape the multifaceted connection between individual and collective trauma, probing the exterior layers of Israeli society and exposing the complex relationship between society and emotionally scarred individuals everywhere.

Divided into three main parts, particular attention is paid to the treatment of soldiers and civilians, and the tension between the medical and societal approaches to PTSD, shedding light on the intricate relationships between war trauma and society worldwide. Part 1 looks at traumatized soldiers and the changing attitudes towards CSR and PTSD; Part 2 explores civilian trauma and shock, including the first published research on the implications of war trauma in Israeli Arab society; and Part 3 analyses the deficiencies and contradictions in current international definitions and discourses of trauma, and the profound consequences of war trauma in society as a whole.

Psychological War Trauma and Society will be of key value for academics and postgraduate students in the fields of psychology, sociology, history, Jewish studies, military studies, social work, terrorism studies and political science, as well as professionals who work with traumatised individuals, either directly or indirectly, including psychologists, psychotherapists and social workers. The Hebrew edition of the book was the winner of the 2012 AIS (Association for Israel Studies) Shapiro Award for Best Book in Israel Studies.

Introduction to the Non-Israeli Reader.  Introduction: War trauma, myth, and longing in Israeli society.  Part 1: "In the Terrible Silence that Followed": Soldiers, society and combat stress reaction  Trapped in the Myth.  The Starting Point.  The Early Decades: Starting point to turning point.  "The Helicopter isn’t Coming": The wounded and the system.  Trauma and War Debate in Israel.  Combat Stress Reaction in an Era of Social Privatization  Part 2: The Israeli Home Front: Between heroism and victimhood  Lower in Rank: Israeli citizens in war and terror.  The Changing Face of War and the Emergence of a Trauma Discourse.  From Denial to Recognition.  The Trauma Discourse Dialectic.  War Trauma in Israeli-Palestinian Society.  Part 3: The Shadow of War in People's Hearts: In lieu of a conclusion  The "Invention" of Trauma: Debate and conceptualization.  From Stone to Lake and Back: The individual and collective circles of trauma.  Epilogue

Irit Keynan is Senior Lecturer and Head of the Graduate Program for Education, Society and Culture, College for Academic Studies, Or Yehuda, Israel. She is also the author of two award winning books.