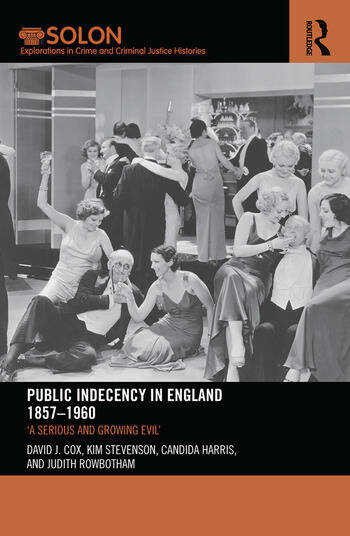 Throughout the nineteenth century and twentieth century, various attempts were made to define and control problematic behaviour in public by legal and legislative means through the use of a somewhat nebulous concept of ‘indecency’. Remarkably however, public indecency remains a much under-researched aspect of English legal, social and criminal justice history.

Covering a period of just over a century, from 1857 (the date of the passing of the first Obscene Publications Act) to 1960 (the date of the famous trial of Penguin Books over their publication of Lady Chatterley’s Lover following the introduction of a new Obscene Publications Act in the previous year), Public Indecency in England investigates the social and cultural obsession with various forms of indecency and how public perceptions of different types of indecent behaviour led to legal definitions of such behaviour in both common law and statute.

This truly interdisciplinary book utilises socio-legal, historical and criminological research to discuss the practical response of both the police and the judiciary to those caught engaging in public indecency, as well as to highlight the increasing problems faced by moralists during a period of unprecedented technological developments in the fields of visual and aural mass entertainment. It is written in a lively and approachable style and, as such, is of interest to academics and students engaged in the study of deviance, law, criminology, sociology, criminal justice, socio-legal studies, and history. It will also be of interest to the general reader.

Introduction: Defining Public Indecency  1. The Historical Background: Indecency And The Rise Of Moral Activism  2. The Intensification Of The Indecency Agenda 1857-1885  3. ‘Demoralization’ And Moral Activism: Fighting The ‘Serious And Growing Evil’ 1885-1908  4. A Real Or Imagined Enigma? ‘Stemming The Tide Of Corruption’: Indecency 1908-1960  5. Indecorous And Inexpedient: Visual And Aural Indecency In The Dramatic Arts 1857-1960  6. Indecency In Practice: The Policing And Judicial Response  7. Intoxicated Indecency: How The Drink Problem Was Resolved  8. Conclusion.

David J. Cox is Reader in Criminal Justice History at the University of Wolverhampton, an Honorary Research Fellow of Keele University, and a fellow of the Royal Historical Society. His research interests include Victorian prisons, eighteenth-century policing (with particular emphasis on the Bow Street ‘Runners’) and the role of the magistracy in dispensing informal justice. He has published widely in the field of criminal justice history. Recent publications include Crime in England, 1688-1815 (Routledge, 2014), Policing the Factory: Theft, Private Policing and the Law in Modern England 1777-1968 [with B. Godfrey] (Bloomsbury Academic, 2013), and ‘A Certain Share of Low Cunning’: A History of the Bow Street Runners, 1792-1839 (Routledge, 2012).

Kim Stevenson is a Professor in Socio-legal History at Plymouth University, co-founder and director of SOLON, and one of the general editors of the Routledge SOLON series. Her research interests focus on the historical and contemporary aspects of the criminal law with particular emphasis on sexual offences and sexuality. She has published numerous books in her field, with recent publications including Crime News in Modern Britain. Press Reporting & Responsibility, 1820-2010 [with J. Rowbotham and S. Pegg (Palgrave 2013), and an edited collection Gender, Sexualities and the Law (Routledge, 2011).

Candida Harris is a Visiting Research Fellow at Plymouth University. Her research interests include constitutional law and human rights, historical perspectives on contemporary problems, and the Mental Deficiency Act 1913 and the control of deviant behaviour. Her publications include ‘Inaccessible and Unknowable: Accretion and Uncertainty in Modern Criminal Law’ [with K. Stevenson] in Liverpool Law Review 29 (2008) and ‘Truth, law and hate in the virtual marketplace of ideas: perspectives on the regulation of Internet content’ [with J. Rowbotham and K.Stevenson] in Information & Communications Technology Law Vol.18 No.2 (June 2009).

Judith Rowbotham is a full-time independent scholar based in London, co-founder and director of SOLON, and one of the general editors of the Routledge SOLON series and Honorary Research Fellow at Plymouth University in the Plymouth Law School. Her research interests include the presentation or reportage of the legal process, including the criminal justice system, in various non-fiction and fiction formats, and issues of gender, violence and cultural comprehensions of the law in action, from the late-eighteenth century to the present. Recent publications include the afore-mentioned Crime News in Modern Britain. Press Reporting & Responsibility, 1820-2010 (Palgrave, 2013) and Shame, Blame, and Culpability: Crime and violence in the modern state [edited with Marianna Muravyeva, and David Nash] (Routledge, 2012).

‘A welcome historical study of behaviour that often divides everyday opinion - public drinking, obscenity, vice and immorality - some of which is prosecuted in court, some ends up in the newspapers, and much of which is discussed in the pub. Not least, the book reminds students, legal researchers, historians, and sociologists that a great deal of human behaviour is often regarded as "offensive".’ - Barry Godfrey, Professor of Social Justice, University of Liverpool, UK

‘How often is one’s conduct in private unacceptable behaviour outside the home? If instinctively the conduct evokes a ready answer, it is far from obvious in infinite situations. Occupancy of the audience, visually or imagined, is everything. Once it was the obscenity of the language – written or uttered vocally in a crowded scene is one way. Social attitudes are another. The authors of these essays on public indecency choose the period of 1857 to 1960 to pose the societal problems, which reminds one that only after the Matrimonial Causes Act of 1857 was a divorce granted judicially for the first time, and then only in cases where one spouse was litigiously at fault by way of adultery, desertion or cruelty. The myriad problems of conflicting moral values are fascinatingly expounded by the essays’ authors in a sample of sociological material that is, literally, all too rare a publication.’ - Sir Louis Blom-Cooper, QC