Public-Spirited Citizenship
Leadership and Good Government in the United States 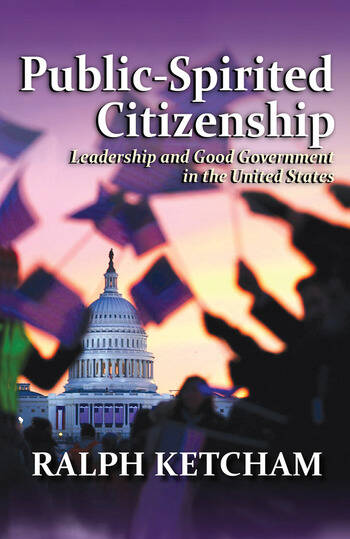 Public-Spirited Citizenship: Leadership and Good Government in the United States

Any searching look at the theory and practice of citizenship in the United States today is bewildering and disconcerting. Despite earnest concern for participation, access, and "leverage," there is a widespread perception that nothing citizens do has much meaning or influence. This book argues that for American democracy to work in the twenty-first century, renewed interest in teaching the nation's young citizens a sense of the public good is imperative.

All of the nation's founders, especially Adams, Jefferson, Franklin, and Madison, addressed the question of whether and how a citizen can make a difference in the American political process. This concern harkens back even farther, to Locke, Erasmus, and Aristotle. Today, one obstacle to good citizenship is the social scientific turn in political science. Leaders in civic education in the twentieth century eschewed grand ideas and moral principles in favour of a focus on behaviourism and competitive, liberal politics. Another problem is the growing belief that the government has no business promoting the public good through the support of religious, educational, or cultural efforts.

Ralph Ketcham vividly depicts the relationship of private self-interest and public-spirited action as these pertain to citizenship and good government. This is an enlightening book for the general reader, as well as for students, professional social scientists, and political philosophers.

1 Introduction
A. The Problem of Modern Politics: Rational Choice or Public-Spirited Citizenship
B. Human Nature in Good and Bad Citizenship

2 Premodern Ideas of Good Government and Citizenship
A. Founding Era Conceptions and Revolutionary Sentiments
B. Republican Leadership and Citizenship
C. The Constitution and the Public Good

5 Counterpoints to Conflict-of-Interest Politics and to Minimal Citizenship
A. East Asian Versions of Citizenship and Good Government
B. Comparison and Critique of Aristotelian, Jeffersonian, and Modern Political Ideas

6 Citizenship, the "Influence of Norms," and the Public Good
A. The Madisonian Constitution in 2000
B. The Supreme Court on Religion and Politics: on Church and State

7 Public-Spirited Citizenship
A. The Idea of the Public Good in the Twenty-First Century
B. Revival of Public Spirit