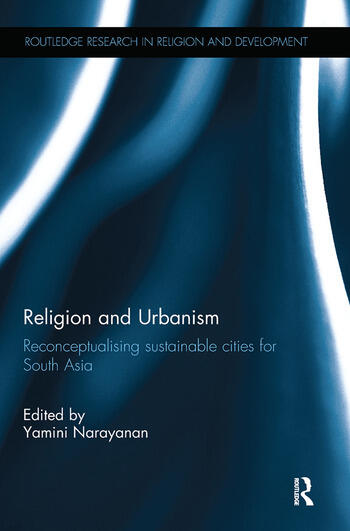 Conceptions of 'sustainable cities' in the pluralistic and multireligious urban settlements of developing nations need to develop out of local cultural, religious and historical contexts to be inclusive and accurately respond to the needs of the poor, ethnic and religious minorities, and women.

Religion and Urbanism contributes to an expanded understanding of 'sustainable cities' in South Asia by demonstrating the multiple, and often conflicting ways in which religion enables or challenges socially equitable and ecologically sustainable urbanisation in the region. In particular, this collection focuses on two aspects that must inform the sustainable cities discourse in South Asia: the intersections of religion and urban heritage, and religion and various aspects of informality.

Yamini Narayanan is a Lecturer in International and Community Development at Deakin University, Melbourne, Australia.

"This pioneering anthology further paves the path for a deeper understanding of ‘religion-urbanism-heritage’ reciprocity and interaction, illustrated with several case studies from South Asia that emphasise the distinct role of religion in urban development and the making of historical cities. This collection will help scholars, planners and administrators in making urban policies more rational and viable." – Rana P.B. Singh, Professor of Cultural Geography and Heritage Studies, Banaras Hindu University, India

"This is an interesting and original treatment of the relations between religion, space and heritage in South Asia. It brings sustainability into the forefront of interdisciplinary scholarship and focuses on connections between urban planning and important belief systems that are still not well understood." – Michael Redclift, Emeritus Professor of International Environmental Policy, King's College

"These deeply researched essays grow from the idea that the religious needs of cities have been overlooked by scholars and planners, as have the contributions that religious belief and practice make to urban life. Dealing with urban questions in Afghanistan, Pakistan, India and Sri Lanka, this book offer readers new perspectives on the ways in which religious practice have helped to shape twenty-first century cities. The writers argue that sustainable, tolerable futures for South Asian cities will only result from processes that take account of the daily reality of religious belief and custom." – Robin Jeffrey, Visiting Research Professor, Institute of South Asian Studies, National University of Singapore

"This book shows that religion has made a structuring impact over the city in South Asia. Not only because shrines and processions give it a sacred flavor - bringing devotees of different denominations together, sometimes -, but also because ethno-religious nationalisms have all crystallized in an urban space and because communal riots have been an urban speciality. Besides, ghettoization among sectarian lines is much more pronounced in urban settings than in the rural context. This multifaceted book explores all these topics in depth." –Christophe Jaffrelot, Professor of Indian Politics and Sociology, King's College London