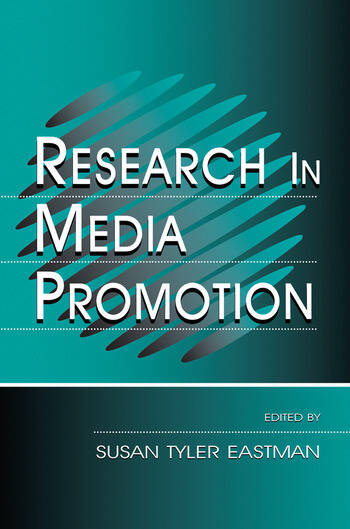 Eastman has assembled this exemplary volume to spotlight media promotion and to examine current research on the promotion of television and radio programs. The studies included here explore various types of promotion and use widely differing methods and approaches, providing a comprehensive overview of promotion research activities. Chapters include extensive literature reviews, original research, and discussion of research questions for subsequent study.

Research in Media Promotion serves as a benchmark for the current state of promotion research and theory, and establishes the role of promotion as a primary factor affecting audience size. Appropriate for coursework and study in programming, marketing, research methods, management, and industry processes and practices, this volume offers agenda items for future study and is certain to stimulate new research ideas.

"The mere fact that so much information has been captured, analyzed, and deposited in one convenient volume makes this book a worthwhile purchase."
—The Journal of Media Economics

"The contributors to this project have wisely taken an interdisciplinary approach, where knowledge has been borrowed and adapted from such diverse sources as consumer behavior, brand marketing, advertising, and social psychology. The chapter references alone are reason enough to praise book."
—The Journal of Media Economics

"Research in Media Promotion is a gateway to an important part of the media world that has received little attention from scholars. Serious, systematic, and consistently interesting, its contributors provide a great start toward illuminating a world of symbol-creation that strongly influences what so many people see, hear, touch, and think about."
—Joseph Turow
Annenberg School for Communication, University of Pennsylvania

"While other texts have covered various promotional strategies and stressed the need to do promotion and to do it well, this book breaks much-needed new ground by placing promotion in a solid research context. How promotion works (or doesn't work) is linked to research and theory and distances the process from the usual after-the-fact guesswork that occurs in creating and evaluating promotional efforts. Of particular note are invaluable chapters provided by Eastman on the overview of media promotion research, by Perse who covers the need for a theoretical base, by Bellamy and Traudt who bring a product branding orientation to television networks and programs, and by Ferguson who provides a timely and comprehensive overview of online program promotion."

"As media outlets proliferate, offering people evermore ways to spend their time, program promotion becomes an increasingly important tool for building and maintaining audiences. Susan Eastman and the contributors to this volume tackle the subject head-on with an eclectic mix of working theory and scholarship--drawing on everything from communication research to cognitive psychology to marketing and the trade press. In doing so, Research in Media Promotion fills an important gap in an area of growing importance to both industry and academe."
—James G. Webster
Northwestern University