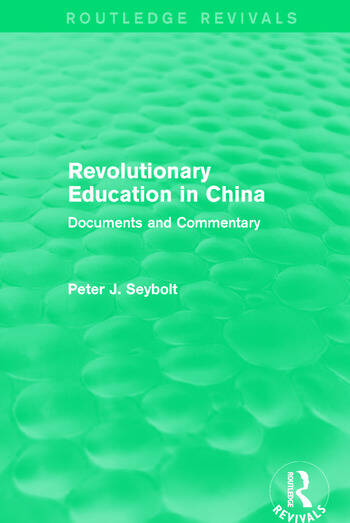 Originally published in 1973, this title analyses revolutionary changes in the Chinese education system and illustrates China’s radical departure from both traditional and Western goals. In his extensive introduction, Peter J. Seybolt puts the transformation of education in the context of China’s socio-economic development and offers insight into why educational reform is at the heart of Chinese society’s radical progress. Additionally, this volume offers valuable historical background as well as a biographical guide and a glossary allowing for a fuller understanding of both historical and modern issues. This is an ideal title for students interested in Asian Studies and History.

Introduction;  Part I: History of the Struggle over Educational Policy;  1. Chronology of the Two-Road Struggle on the Educational Front in the Past Seventeen Years;  Part II: General Directives;  2. Quotations from Chairman Mao  3. Universities and Middle and Primary Schools Should All Resume Classes and Make Revolution  4. Shorten the Period of Schooling and Revolutionize Education  5. The Working Class must Exercize leadership in Everything; Part III: Educating the Elites;  6. The ‘May 7’ Cadre School   7. On the Reeducation of Intellectuals  8. Wholeheartedly Complete ‘Reeducation’ Work; Part IV: Control of the Schools;  9. Chairman Mao’s (March 7)Directive Concerning the Great Strategi Plan for the Great Proletarian Cultural Revolution  10. Thoroughly Implement the Latest Directive of our Great Leader Chairman Mao, and Firmly Execute the Battle Orders Issued by the Proletarian Headquarters  11. School Management by Poor and Lower-Middle Peasants as Shown by the Practice of Three Production Brigades in the Educational Revolution  12. Consolidate the Leadership of the Working Class Over the Educational Revolution;  V. Teachers and Teaching;  13. Taking a Joyous Step Forward in the Educational Revolution  14. Strengthen the Building of the Ranks of Urban Primary and Middle School Teachers  15. A ‘Mobile University’ for Training of Teachers with Greater, Faster, Better, and More Economical Results;  Part VI: Short-Term training Classes;  16. Four New Kinds of Schools;  VII: Elementary Education, Rural Schools;  17. A Primary School Run by the People Under the Control of the Poor and Lower-Middle Peasants  18. The Poor and Lower-Middle Peasants Have Acquired Socialist Culture  19. A Network for Popularizing Socialist Education;  VIII: Middle Schools, Physical Ecuation;  20. A Middle School Serving the Three Great Revolutionary Movements  21. How Did We Initiate ‘Industrial Studies’ Activities?  22. Mass Physical Training;  Part IX: Higher-Level Technical Training;  23. The Way to train Engineer and Technical Personnel as Viewed from the Shanghai Machine-Tool Plant  24. Strive to Build a Socialist University of Science and Engineering;  Part X: Liberal Arts Colleges;  25. Liberal Arts Universities Must Carry Out Revolutionary Mass Criticism  26. Reform Liberal Arts Universities Through Revolutionary Mass Criticism;  Part XI: The Yenan Background;  27. Educational Method at K’angsta  28. The Problem of Transforming General Education in the Base Areas  29. On Regulations and Curriculum in General Education  30. Border Region Government Directive on promoting the Study of Model Schools and on Experimentation with Popular-Management Primary Schools (April 18, 1944)  31. Regarding the New Curriculum for Middle Schools  32. Yenan University Educational Policy and Temporary regulations (May 21, 1944);  Appendix;  Biographical Guide;  Glossary