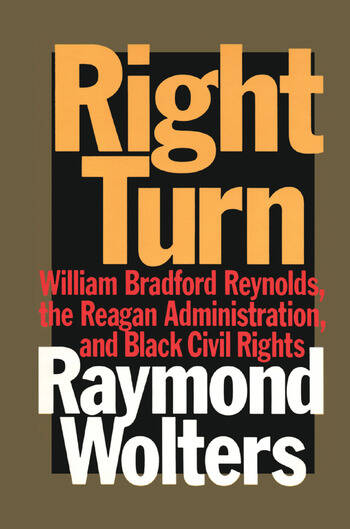 In the spirit of the time, the Civil Rights Act of 1964 and the Voting Rights Act of 1965 called for nondiscrimination for American citizens, seeking equality without regard for race, color, or creed. After the mid-1960s, to make amends for wrongs of the past, some people called for benign discrimination to give blacks a special boost. In business and government this could be accomplished through racial preferences or quotas; in public education, by considering race when assigning students to schools. By 1980 this course reached a crossroads.

Raymond Wolters maintains that Ronald Reagan and William Bradford Reynolds made the "right turn" when they questioned and limited the use of racial considerations in drawing electoral boundaries. He also documents the Reagan administration's considerable success in reinforcing within the country, and reviving within the judiciary, the conviction that every person black or white should be considered an individual with unique talents and inalienable rights.

Because Ronald Reagan and William Bradford Reynolds were men of the right, and because most journalists and historians are on the left, Wolters feels the "people of words" have dealt harshly with the Reagan administration. In writing this book, he hopes to correct the record on a subject that has been badly represented. Wolters points out that, beginning in the 1980s and continuing in the 1990s, the Supreme Court endorsed the legal arguments that Reagan's lawyers developed in the fields of voting rights, affirmative action, and school desegregation. In Right Turn, Wolters responds to those who claimed that Reagan and Reynolds were racists who wanted to turn back the clock on civil rights, and he describes civil rights cases and controversies in a way that is comprehensible to general readers as well as to lawyers and historians.